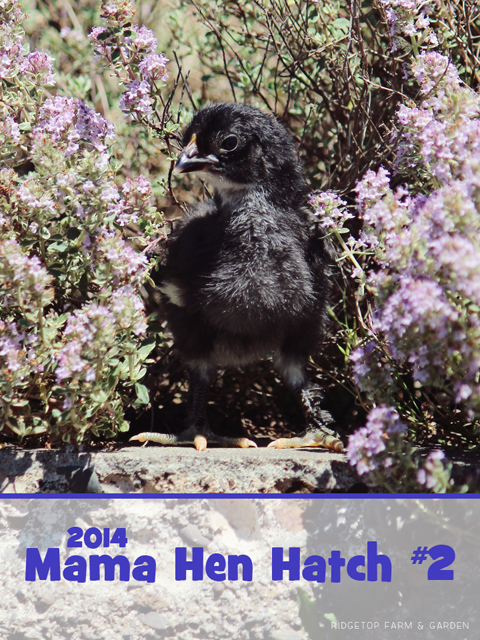 Once again a Black Copper Marans hen went broody. Last time a BCM went broody the outcome wasn’t great, but I decided to give them another shot at motherhood.

The broody hen made her nest box in a black plant container in their coop, certainly not an ideal place for a chick. Not long later another hen went broody and thought the same nest box seemed like a good place to sit.

Then, a third BCM hen went broody. Of course, opting to sit on the same eggs as the other two broody ladies.

As my estimated hatch day was getting closer I told Farmer John we needed to do something about the 3 sitting hens. I didn’t think it would go well for the babies to have 3 hens trying to be mama.

Well, my estimation was a few days too late. One morning I checked on the 3 pack in the nest box and noticed a chick.

Our plan was to take two of the hens off the nest and to separate them from the one hen designated to be mama and the chicks.

Farmer John setting up netting as an attempt to separate the chick. We chose one hen to be mama & put the other two outside in the run.

At bedtime we let the other 2 back in the coop hoping they would hop on the roost. Of course, they didn’t. And by the next morning the other two snuck into the netted area and were back on the nest box. I pulled back the netting & promptly tossed two hens back outside.

I needed to move the chick out of the nest box so it could reach food & water. So, I moved mama, baby & eggs to the ground on a pile of straw. As I was doing that I noticed a second chick. Unfortunately, it had a wonky leg. I don’t know if it hatched that way or was the result of having too many broodies in the nest.

This mama wanted nothing to do with the wonky-legged chick. The two broodies outside, though, were clucking away, so the chick hobbled and drug itself trying to get closer to the mamas that seemed to care. Truth is, its leg was so bad I knew it wouldn’t make it. But, I wasn’t anticipating what happened next.

I decided that maybe if I gave this chick to the two mamas outside that they would leave the one inside alone & focus on the chick they had. Wrong.

As soon as I placed the chick outside, those two bitches came over and started pecking it to death. I’ve never seen anything like, nor do I care to see it again. They were ruthless. I grabbed the chick, but not before it got a number of good pecks. I just assumed that since they were sitting there while it hatched that they would take it in as their own. Nope. I don’t know if they knew it wasn’t quite right & that was nature’s way of dealing with it. Or, if our BCM’s just aren’t meant to be mama’s.

We didn’t have a good solution to keeping the chick and any others that hatched safe from the craziness of three broodies. So, I took the chick & eggs away.

I put the one chick in with some other chicks that were a couple weeks old.

And, put the remaining eggs in the incubator. Four eggs hatched & appear to be doing just fine.

My lesson learned here is that if I’m going to let a mama hatch chicks then I need to let nature take its course and stop interfering. I’m not sure the interfering is doing the chicks any favors… Or, who knows maybe it would have ended up worse. I just don’t know.