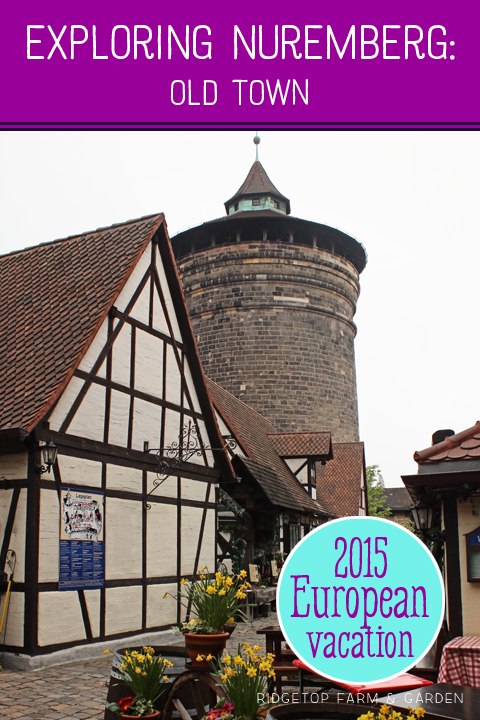 Our hotel in Nuremberg was located right outside the Altstadt, or Old Town, walls. So while the hubby was working, the kids and I spent a lot of time within those medieval walls wondering the cobblestone streets.

Resting on a sandstone ridge, the castle towers above Nuremberg. It was once one of the most important imperial palaces of the Holy Roman Empire.

During our stay in Nuremberg we visited the castle grounds a couple times, but only once did we tour the inside of the buildings. There was so much to explore in the towers and half timbered buildings.

Our favorite things were climbing the steps inside the Sinwell Tower to finally make it to the top to a spectacular view of Old Town and listening to a guide explain the importance of the deep well. 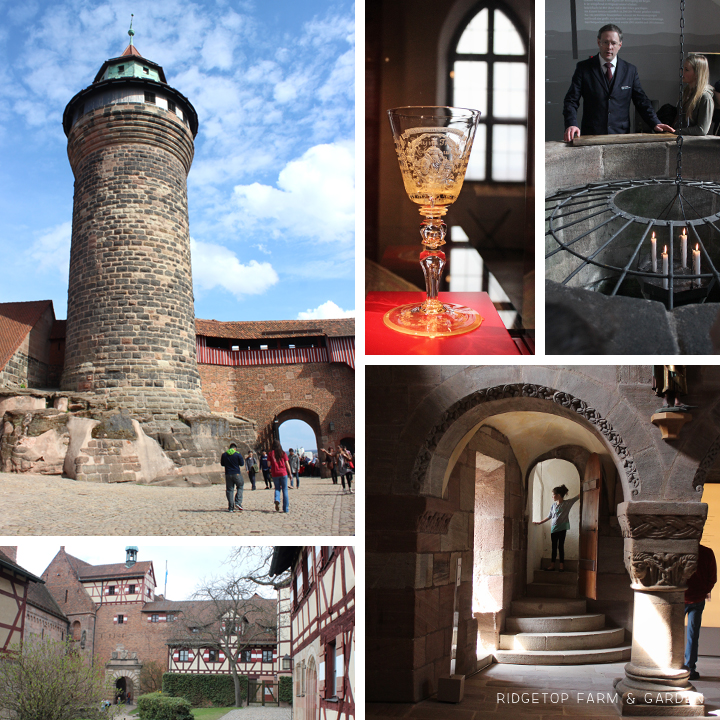 CASTLE GARDEN
On the day the kids and I visited this garden, it was overcast and there were very few people wandering the garden. 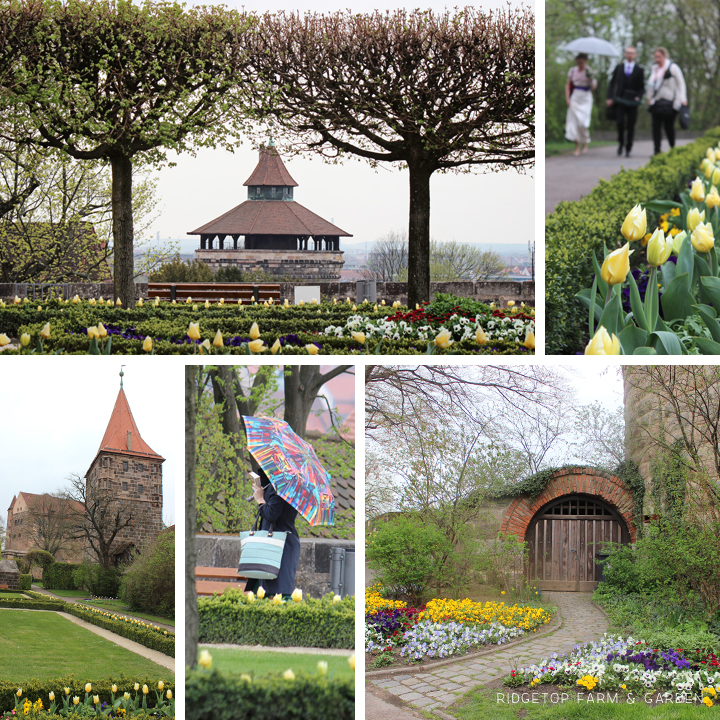 While we were walking through the garden we kept hearing music. It took us awhile to figure it out, but we finally realized it was coming from underneath us. The curious people that we are, we went looking for the sound. What we found was a jolly fellow playing the accordion in a tunnel. 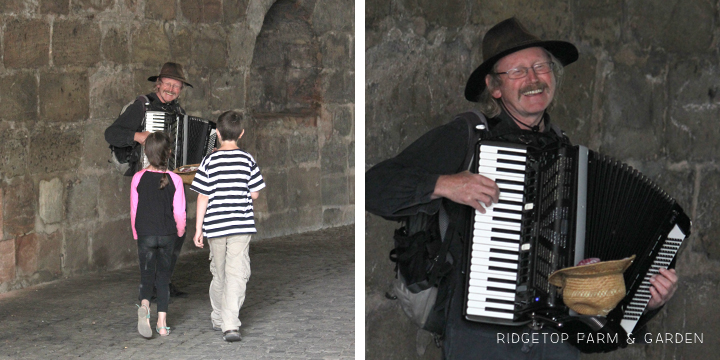 SECRET MOAT GARDEN?
I’m not exactly sure where we were when we walked through this garden. I’m also not sure why these gardens were here.

We were near the castle. I think we were in the moat. The castle wall was lined with individual locked gardens.

Wherever we were it was lovely and quiet and not formally landscaped like the official castle gardens. 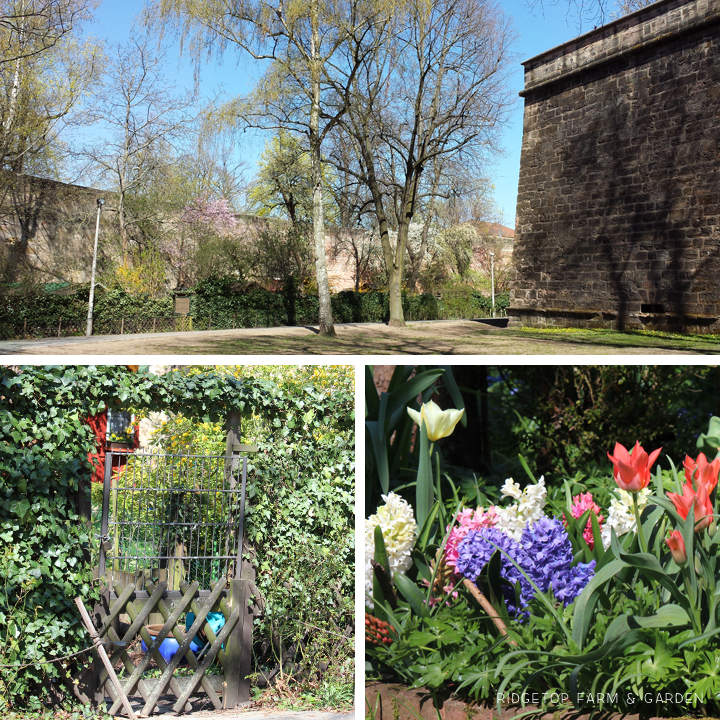 The Craftsman Market (Handwerkerhof) was a quaint step back in time. Inside the half timbered buildings were handmade crafts from leather, tin, glass and more. Loved it. 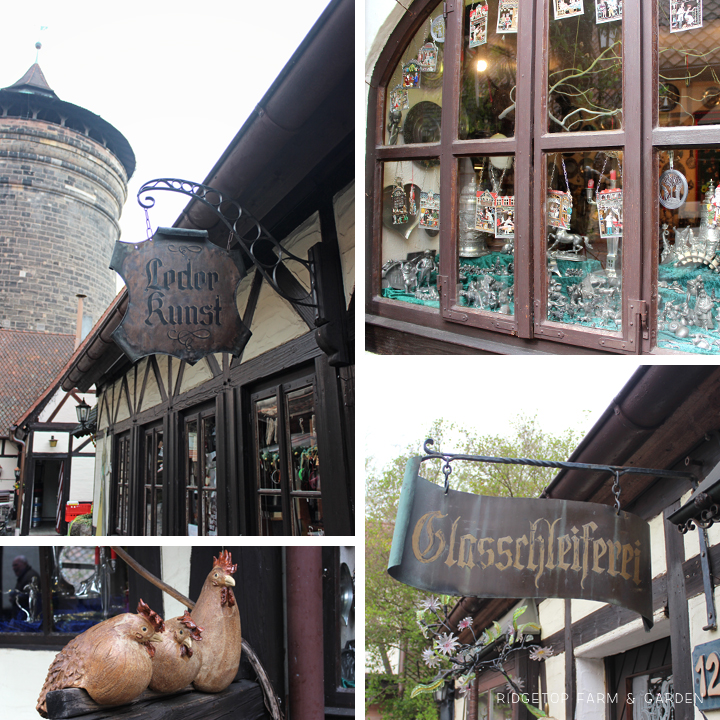 Not too far from the Craftsman Market was a modern shopping district. 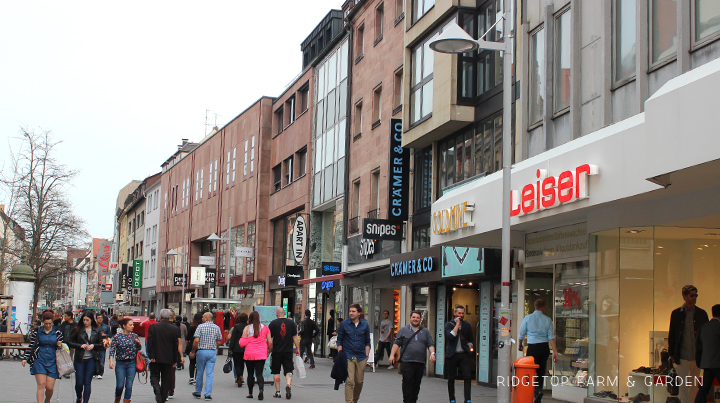 A few shops we visited:
Käthe Wohlfahrt  Fantastic German treasures found here
Lego Store  This was a must
Lebkuchen Schmidt  Of course we had to try this sweet treat
Nanu Nana  I adored this little store of household goodies. My favorite find was a blank canvas in the shape of a heart. 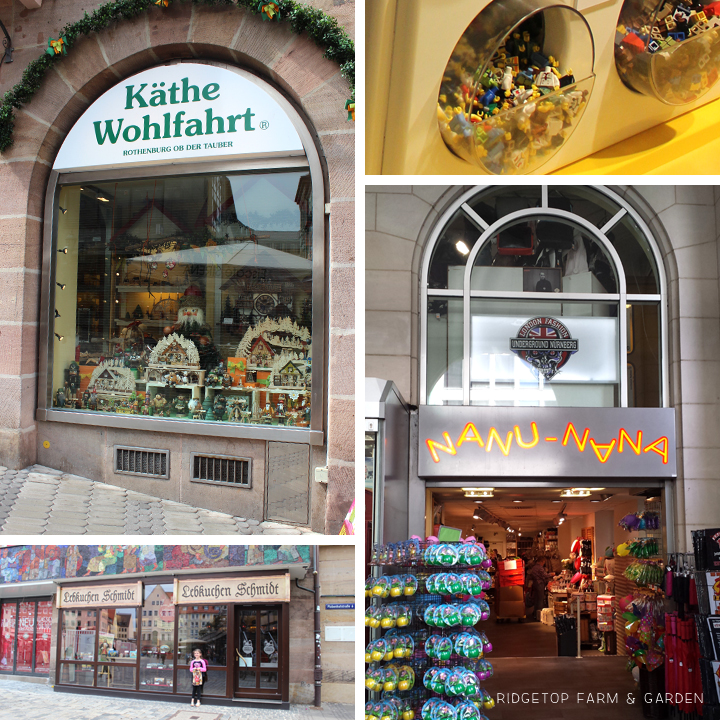 OPEN AIR MARKETS
In a few places throughout old town are these great open air markets. This particular one is Hauptmarkt and has the Frauenkirche church as its focal point. This is the same location for the Christkindlsmarkt (Christmas Market). 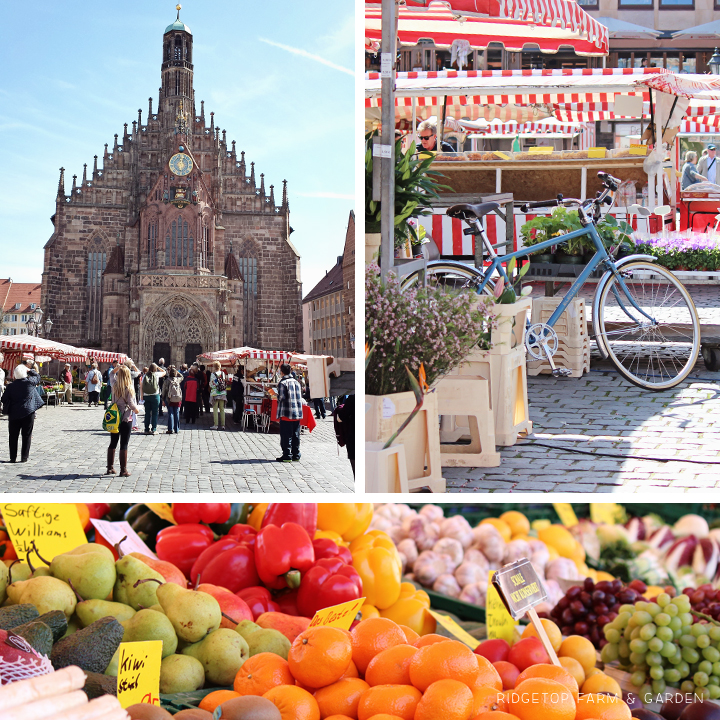 This area of Bavaria has so much history that the Old Town had a number of museums to visit. We visited three.

One place I wish we would have gone to, but never did was the WWII Art Bunker. There are tunnels under the castle that held art to keep it safe during war time.

ALBRECHT DÜRER HOUSE
I love paintings from the Renaissance, so I was excited to visit the Albrecht Dürer house. I was envisioning this being one of the places I had to hurry through because the kids would be bored. I was wrong. We each received our own headphones for an audio tour. The kids had their own fun going room to room listening.

The house was set up similar to that which he would have lived in at the time. It also had a collection of his paintings and a printer’s workshop. 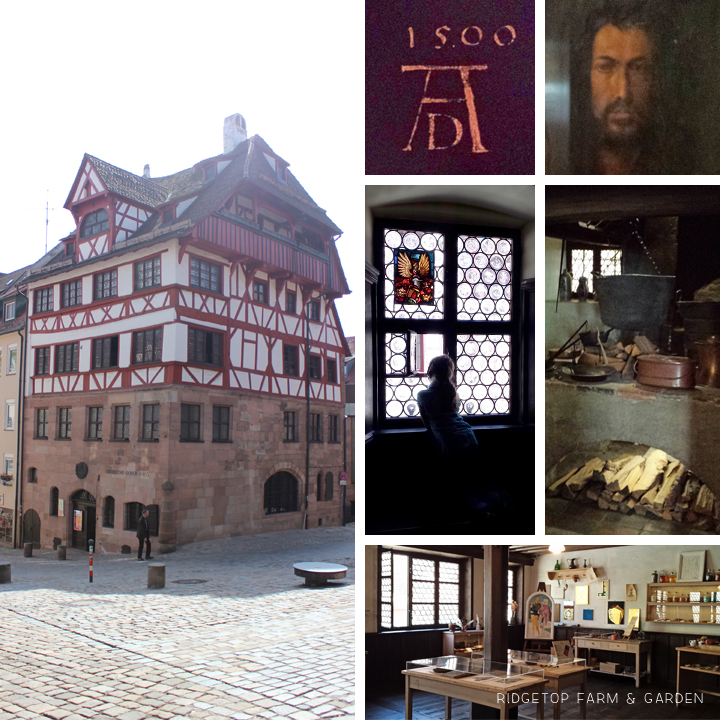 NEUES MUSEUM
For a modern twist in this historical district, we visited the Neues Museum. It was most definitely a change of scenery. The building was sleek and crisp. The artwork was very different from the older works we’d been admiring throughout our vacation. The kids didn’t quite know what to make of some of it. 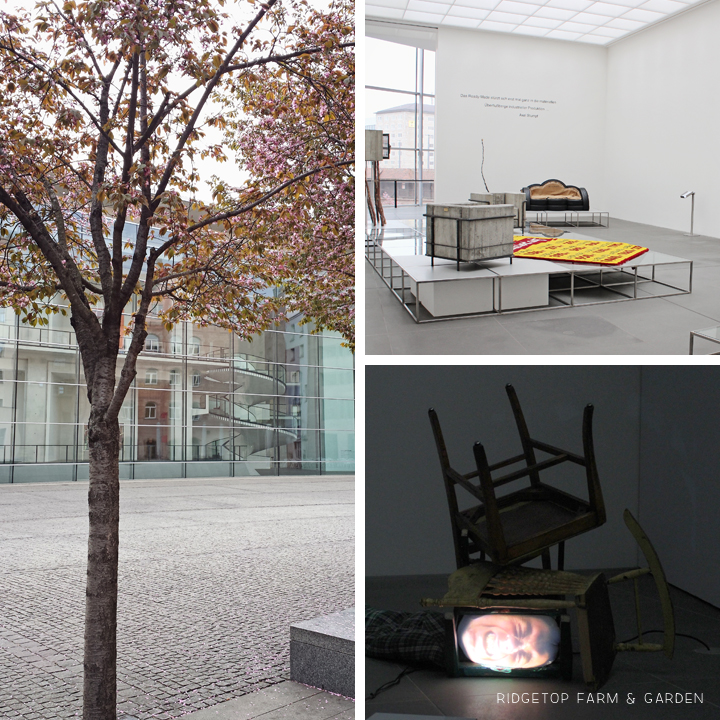 TOY MUSEUM
I was pleasantly surprised with the Toy Museum. It had quite a historical collection of toys ranging from wood, to metal, to Barbie. The kids loved it, too. 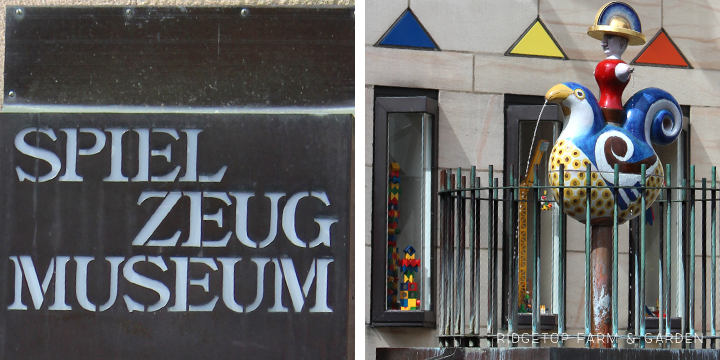 Medieval churches have to be one of my all time favorite things. I love their history.

ST. SEBALDUS LUTHERAN CHURCH
Originally built in the 1200’s, St. Sebaldus sustained significant damage during World War II. Inside the church are many photos showing the damage. It is heartbreaking. The church has been beautifully restored. 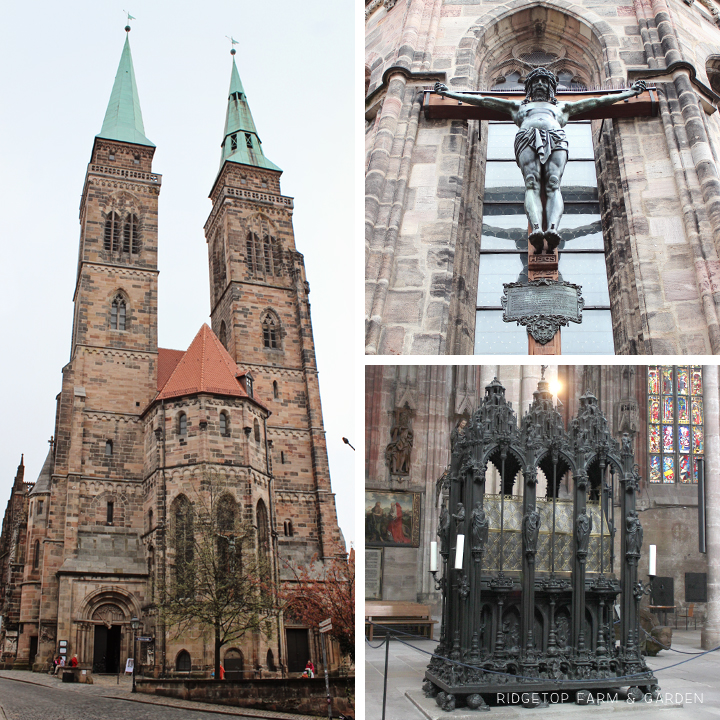 ST LORENZ LUTHERAN CHURCH
The church of St. Lorenz was originally built in its gothic style during the 1400’s. It, too, was damaged during WWII and restored. 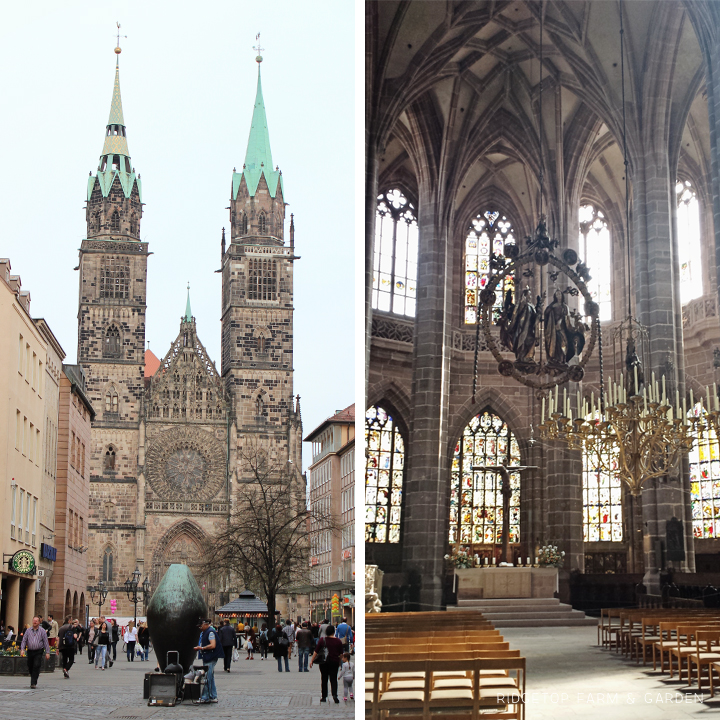 FRAUENKIRCHE CATHOLIC CHURCH
The Frauenkirche was built during the 1300’s, damaged during WWII, and restored.

The gothic building sits in a market square, known as the Hauptmarkt. At noon you can watch the Männleinlaufen (mechanical clock and glockenspiel) with a procession of electors surrounding the Holy Roman Emperor. One afternoon we bought berries at the market and watched the clock. 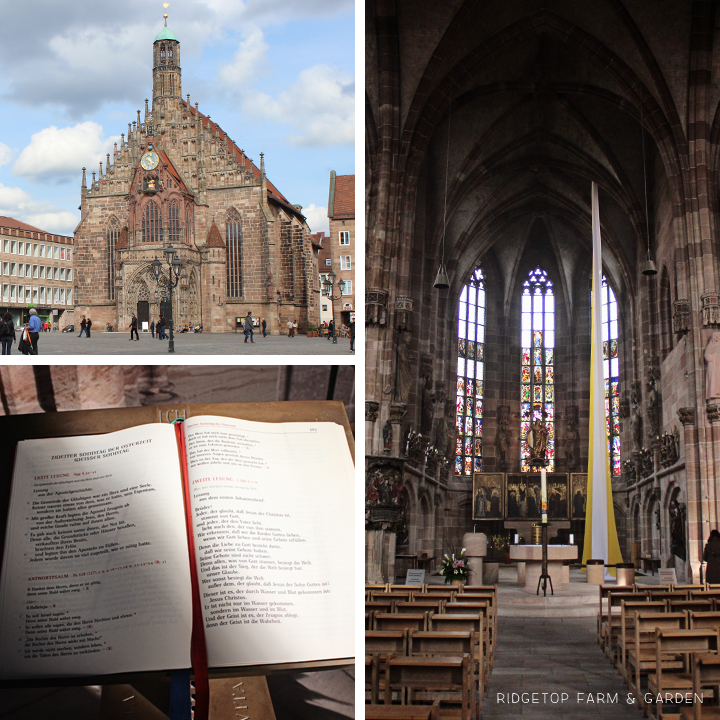 Old Town was the perfect home base for the kids and during our week in Nuremberg.

On my bucket list is to return to Nuremberg during Christmas to visit the Christkindlsmarkt.