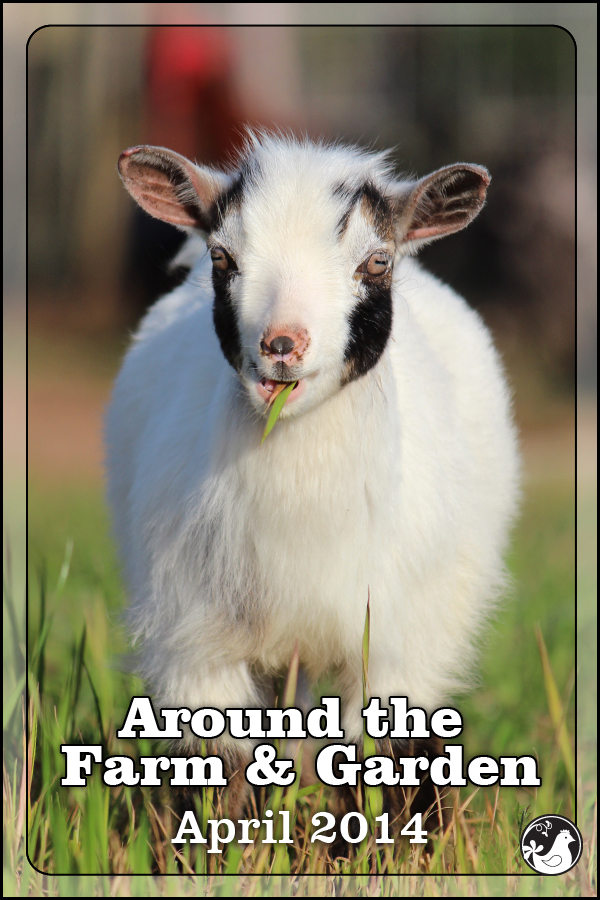 There was a lot of rain this April. Not unusual for our area, but it gets depressing after awhile. Luckily, we did have a few nice days & the chickens took full advantage of it by taking fabulous dirt baths. 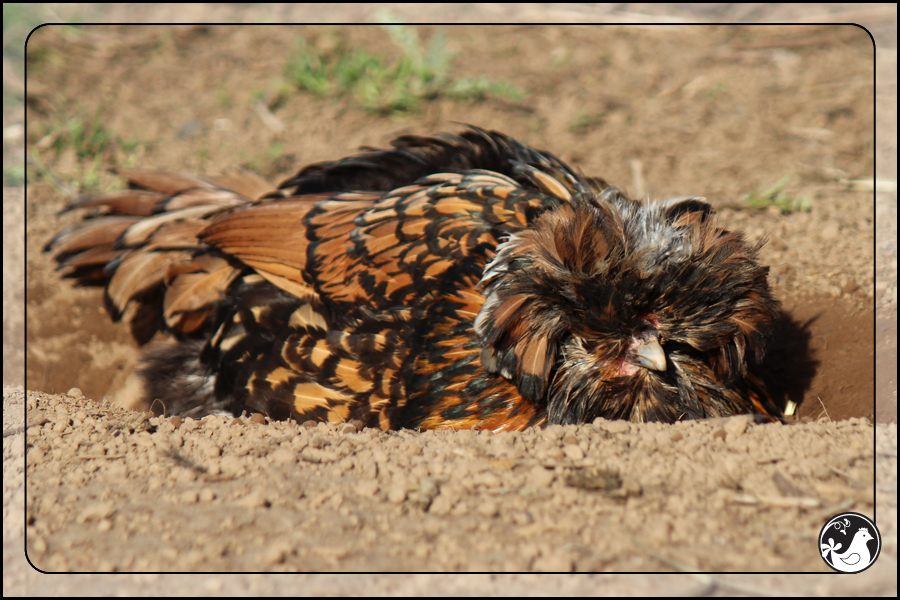 I’m fascinated by the moon & stars. I have a difficult time, but I continue to try to take photos of the night sky. So, when the Blood Moon was supposed to be visible there was no doubt I would try to capture it on my camera. I did get a couple shots of the beginning of the eclipse. But, by the time it was a total eclipse & the moon was supposedly red tinted the clouds hid it & I never saw it. Darn it! Maybe next time in October. 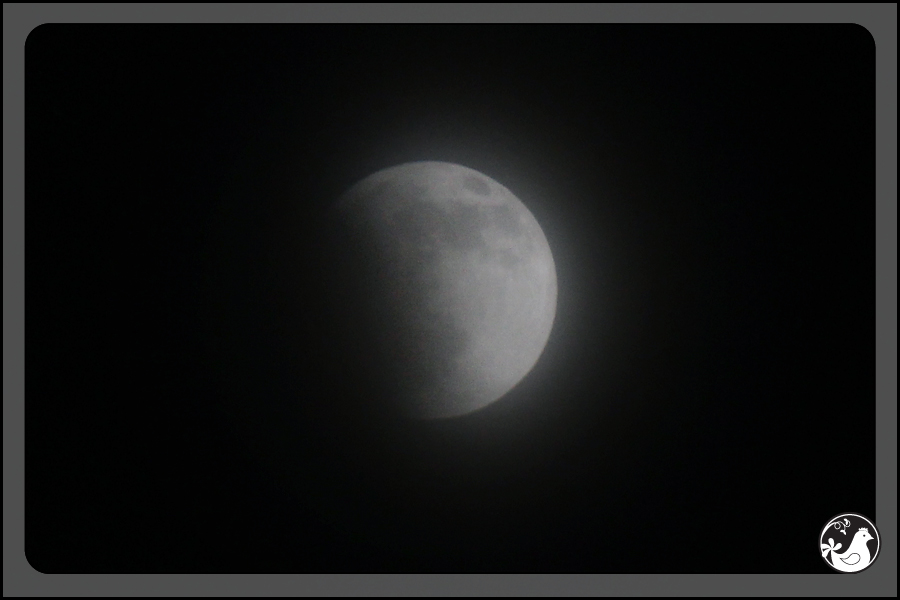 April began with the loss of a dear part of our family. 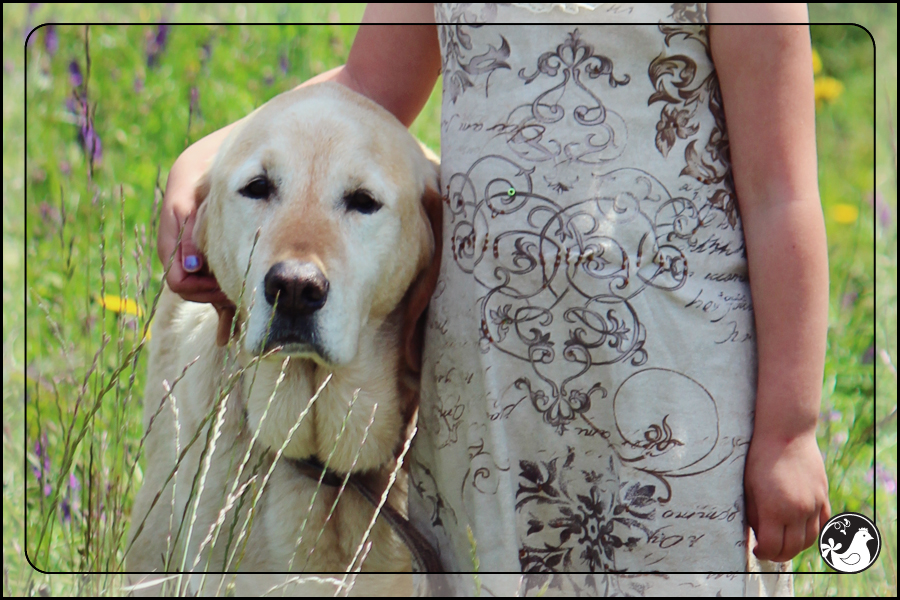 There was a lot of digging, hoeing & more digging going on this month.

I dug up what was supposed to be our strawberry patch & replaced the few berry plants with heather. I had a helper water the heather after I got them all in the ground. 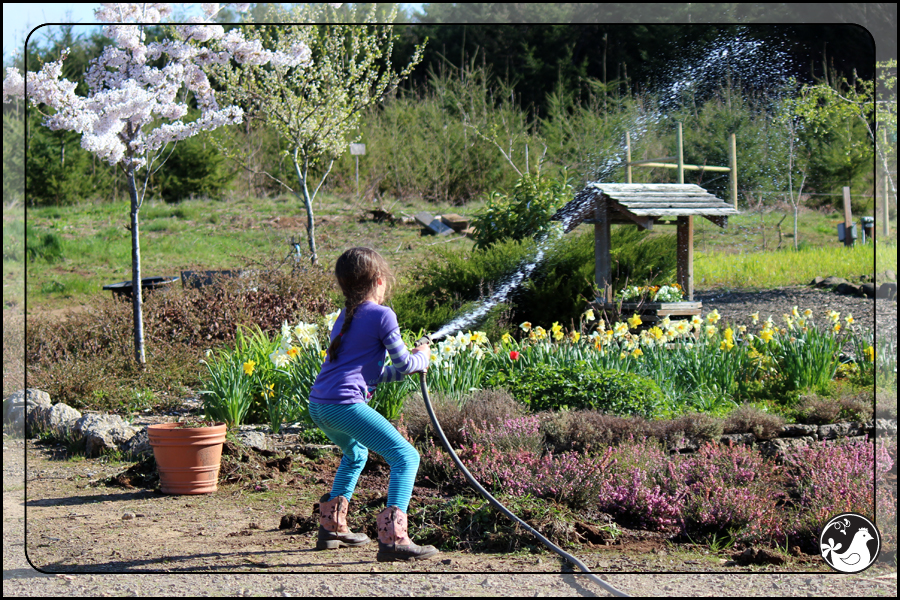 This is not wowing, but I hoed & dug out a kazillion weeds from the flower bed in the Back Yard. It was a lot of work & I was exhausted. Maybe I shouldn’t let it get so overrun with weeds before attacking them. 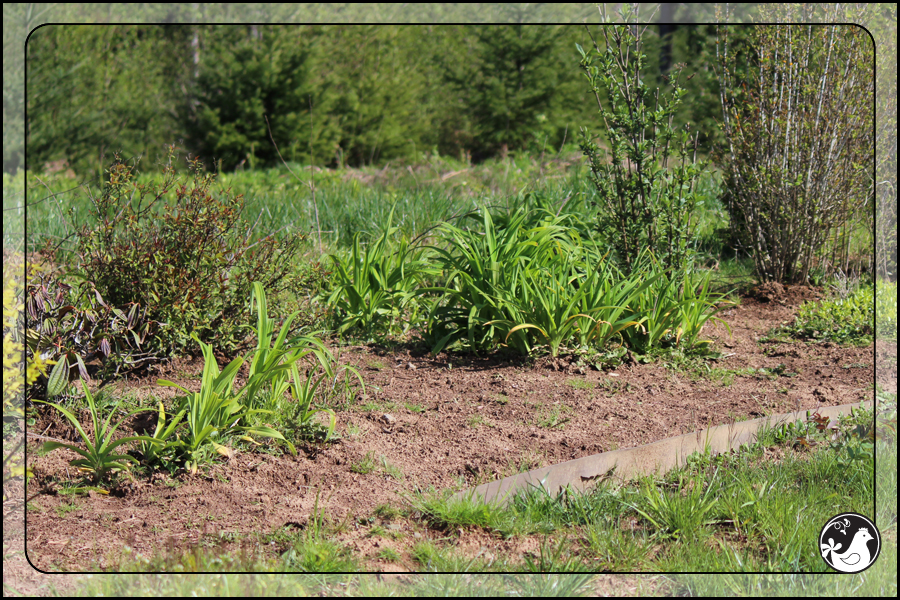 There has always been a problem area in the Bird Village. We’re solving that problem by getting rid of the dirt, plants that won’t grow & weeds that grow too well & replacing them with a pond. 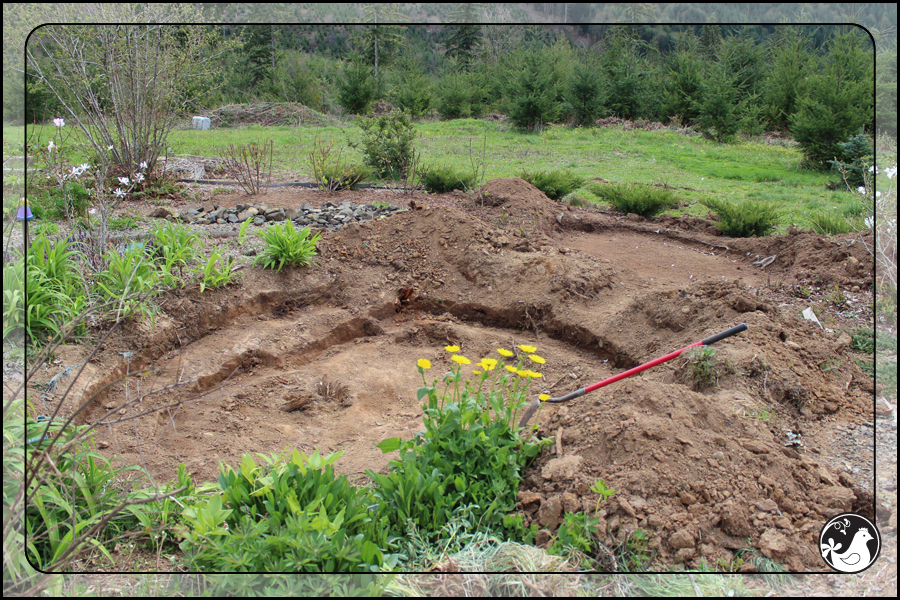 The tomato plants are off to a good start. 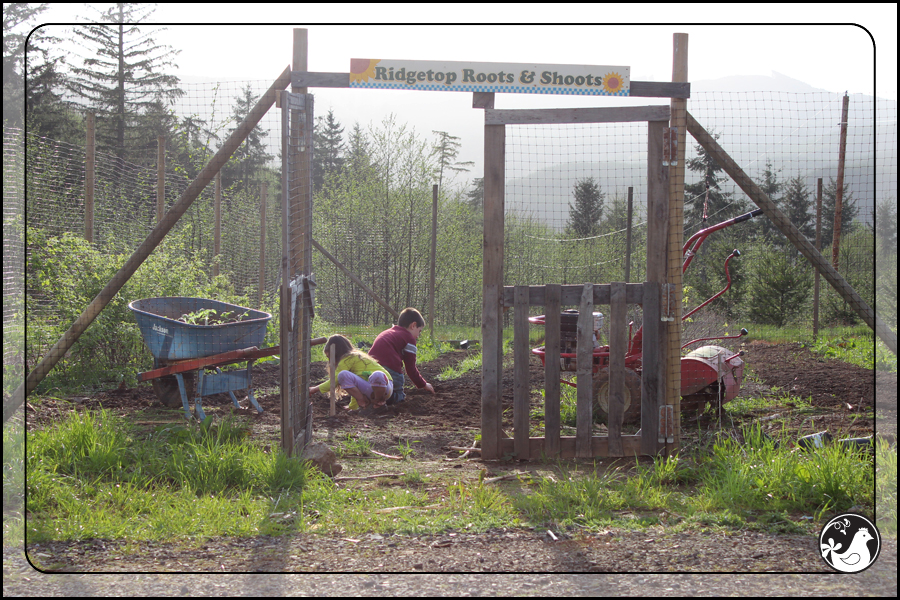 The ducks were on slug & weed patrol in the garden. Although, I’m afraid they may have eaten the peas the kids planted. 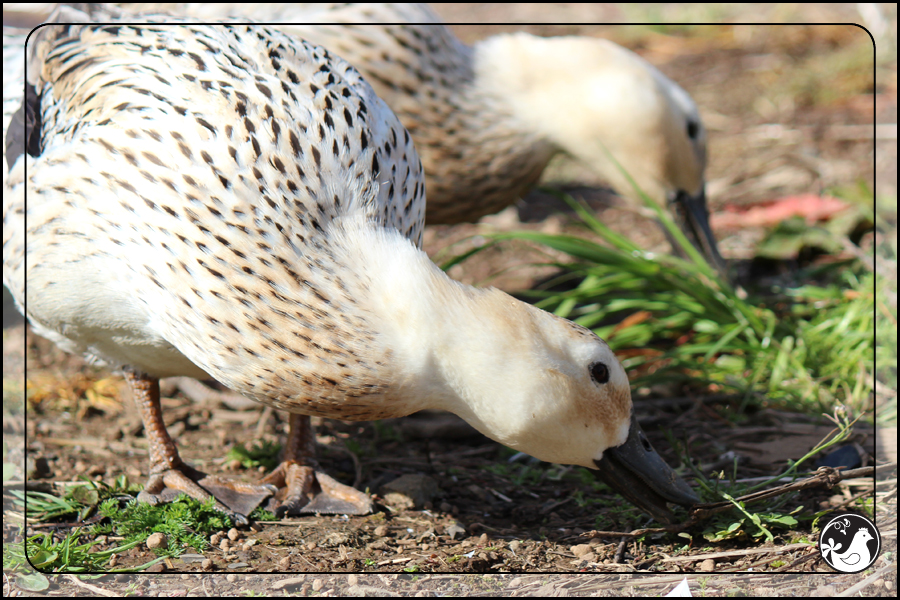 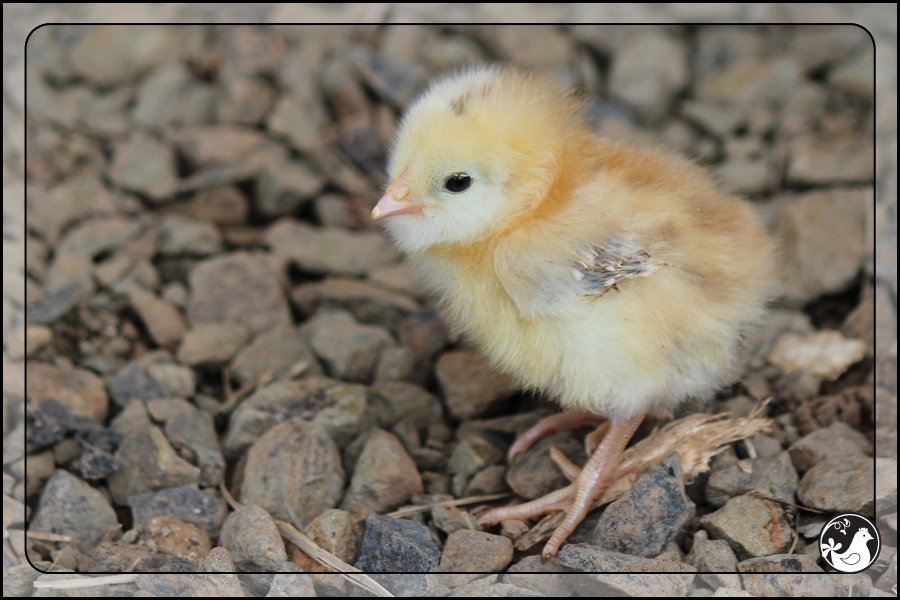 A friend & I were vendors at our first chicken swap. 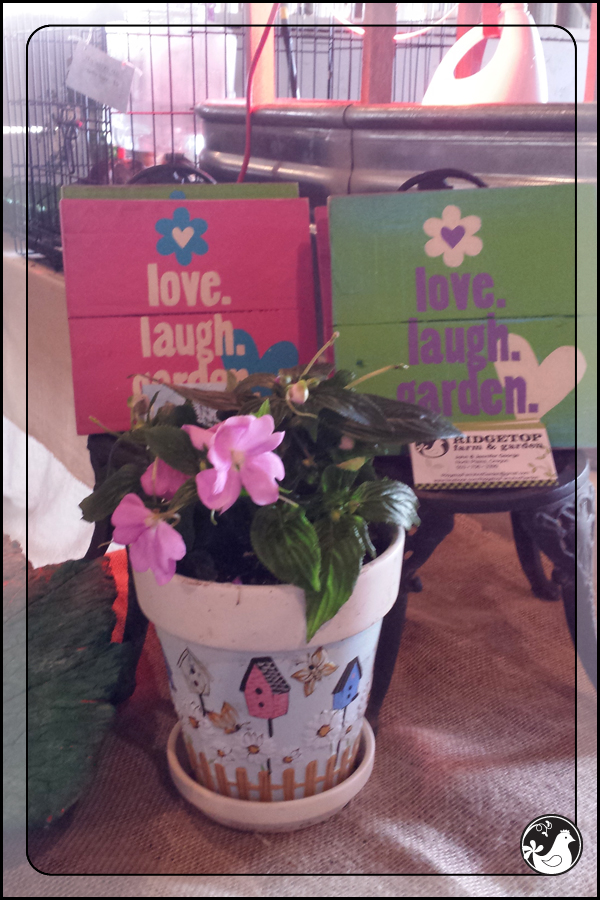 One of our Black Copper Marans is broody. We had to move her from her coop to keep the eggs protected. For the first few hours she was not impressed with the move & paced the fence wanting back home. Thankfully, she eventually sat on her eggs. Since then she has rarely gotten off them. As long as those few hours didn’t mess up the development of the embryos we should have chicks hatching any day. 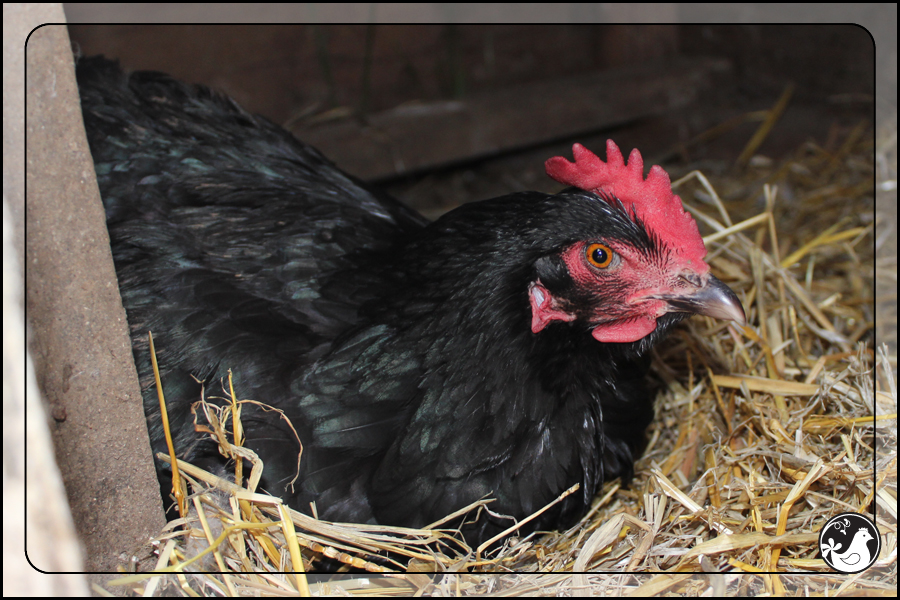 Now this is what I call a fluffy chicken butt. 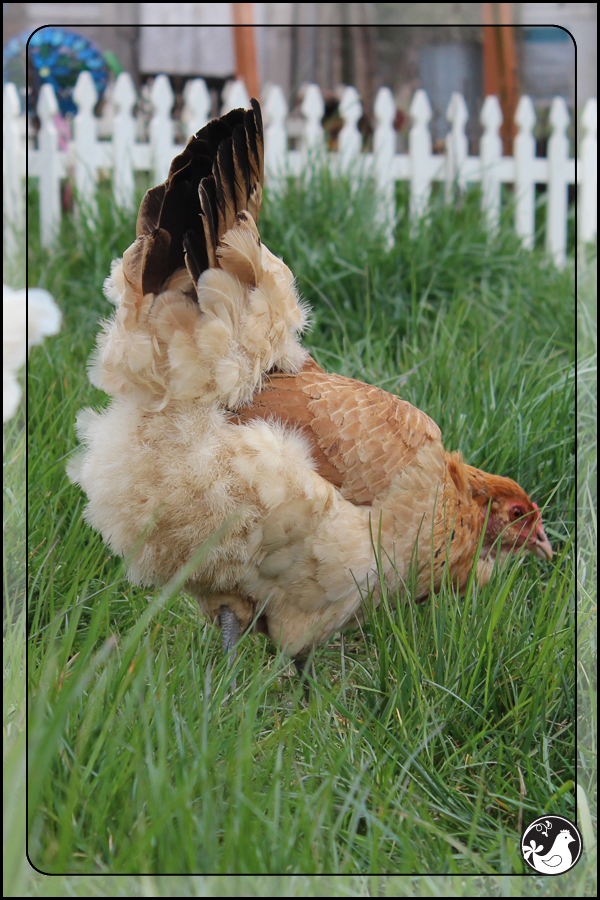 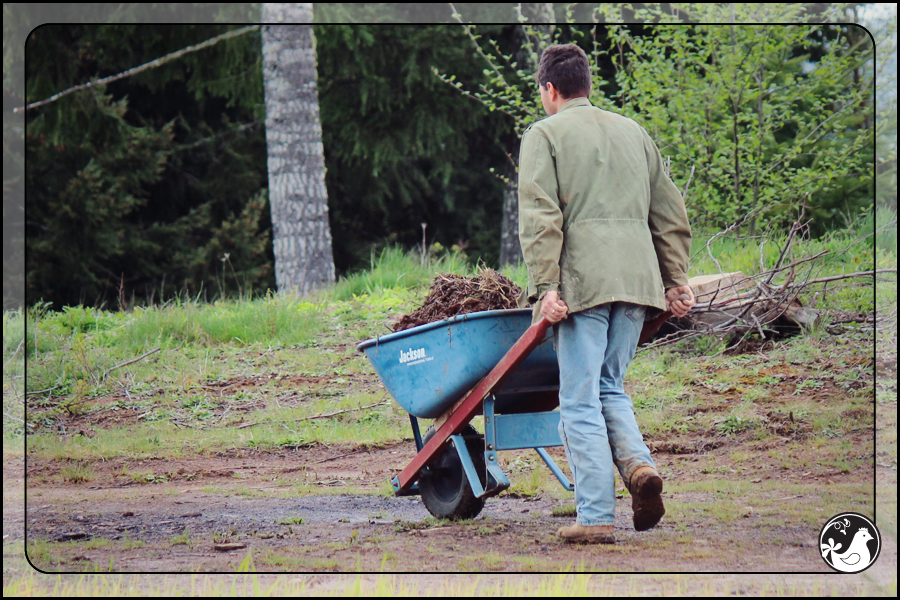 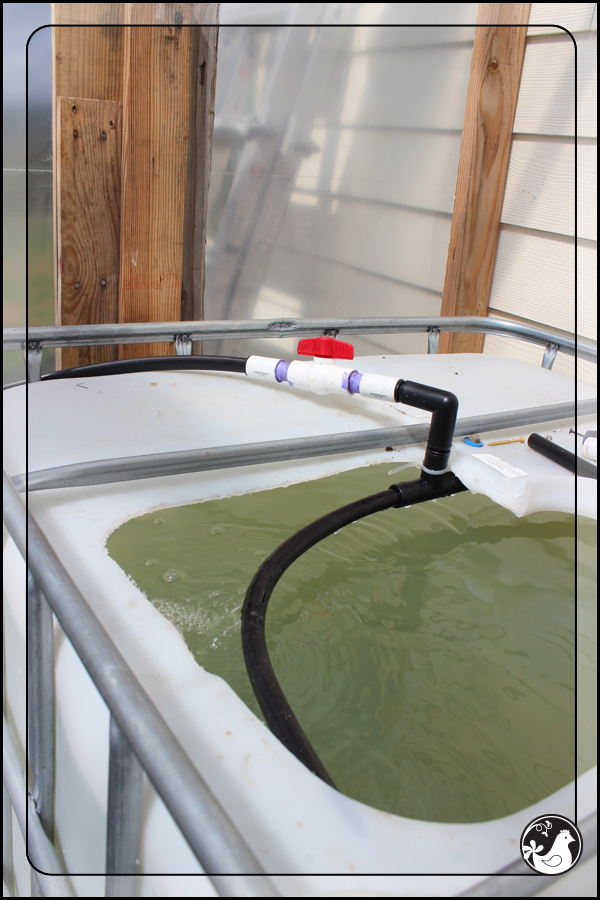 We have lettuce started! The medium Farmer John chose for the first garden bed is clay balls. 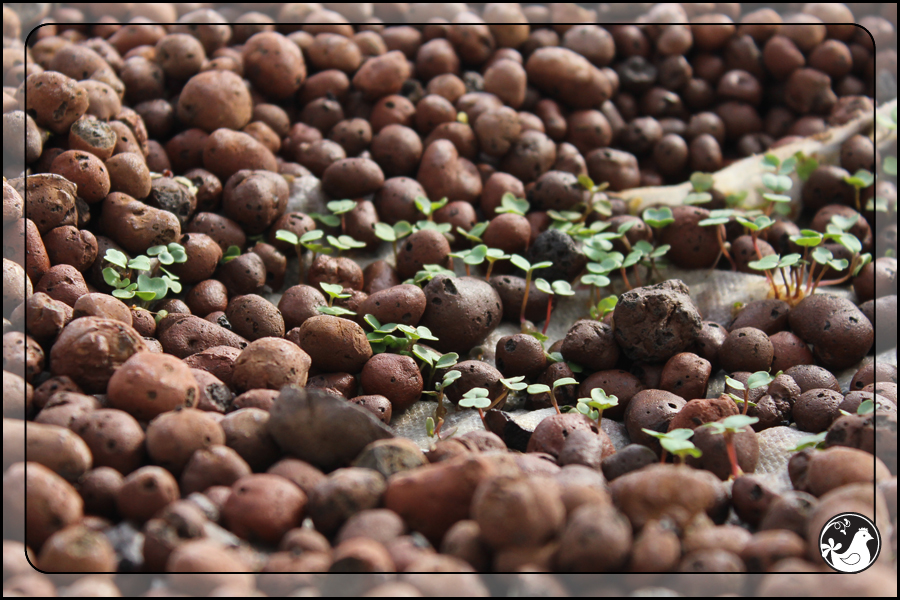 It has been fun getting to learn the personalities of Sven & Olaf. 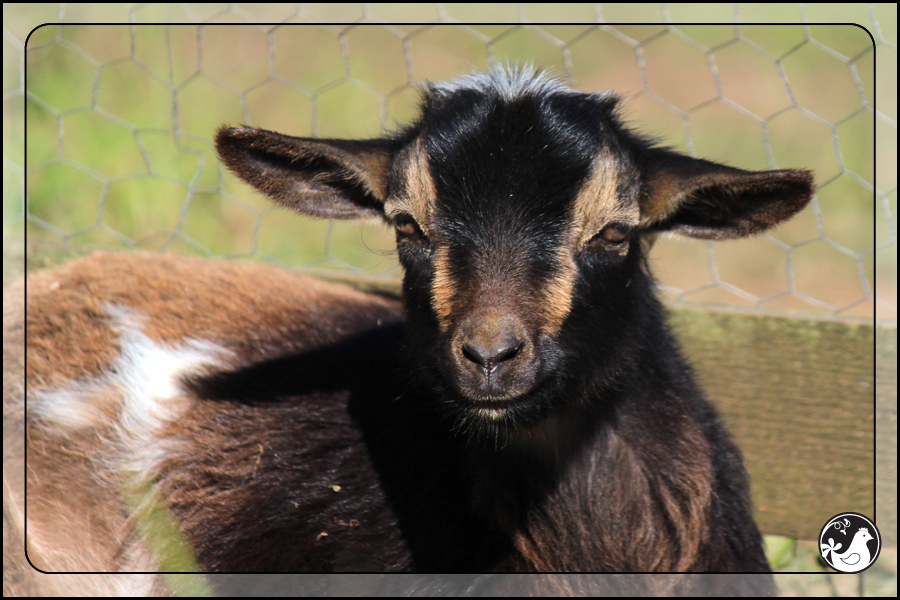 Olaf scratching his foot. Although it’s kind of a weird photo, I think even his teeth are cute. And, I hate teeth. I could never be a dentist. 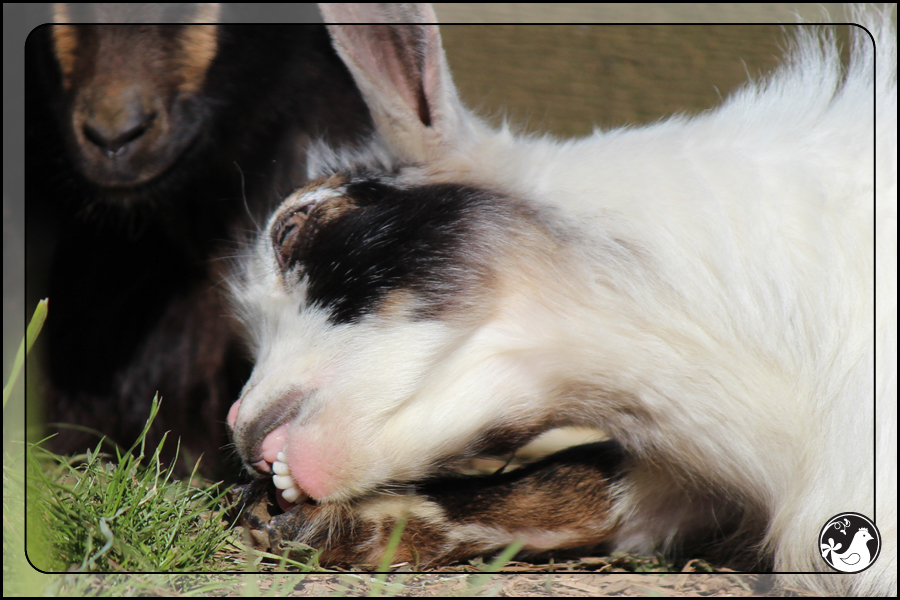 We’ve had lots of birds around lately. But, my favorite was the day an eagle flew over.

There are bald eagles living nearby. But, I never see them around our house. I was ecstatic when I peeked out the window & saw one overhead. So, I grabbed my camera & headed outside. 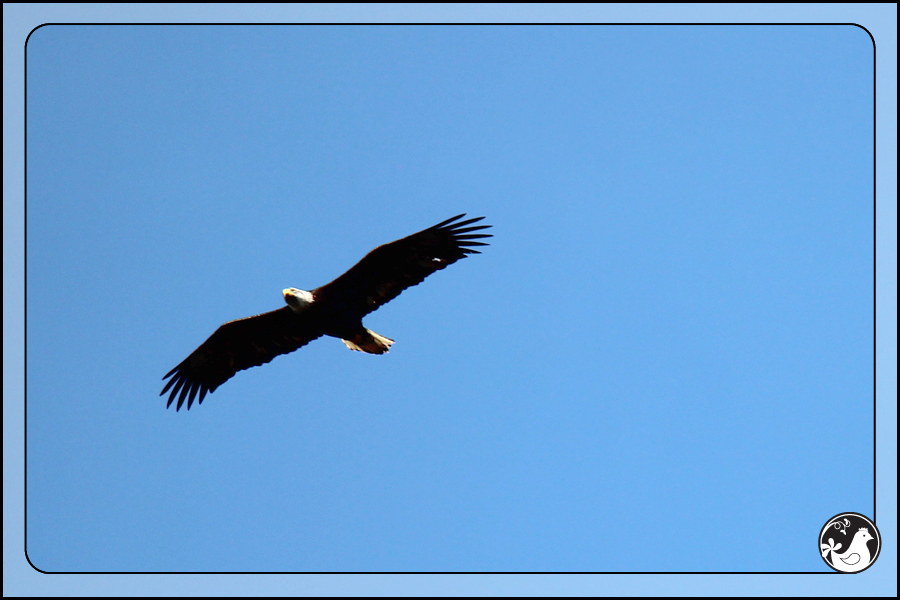 There were also a number of ravens doing some kind of dance. We often have 2 or 3 ravens around, but I never see this many. 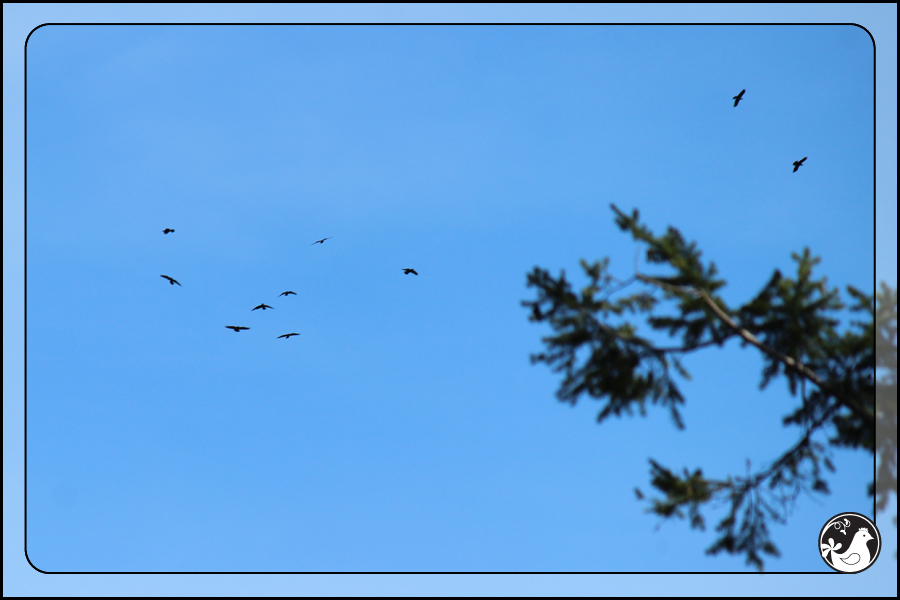 Some how the eagle was a part of the raven dance party. I’m not sure what his purpose was. Was he just flying by & took part in the festivities? Or was he looking for dinner? Eventually, he continued on his way. 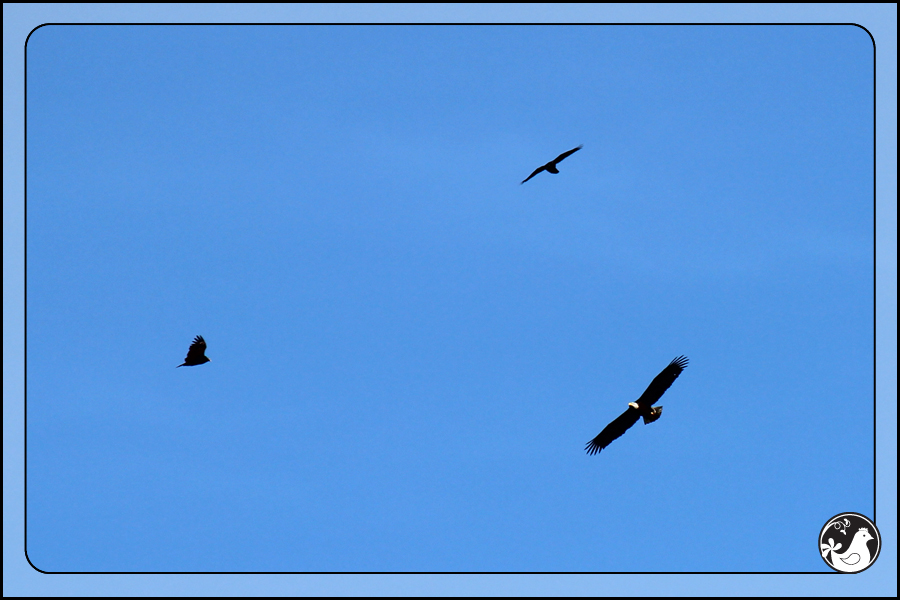 During all the raven excitement a couple vultures were circling. 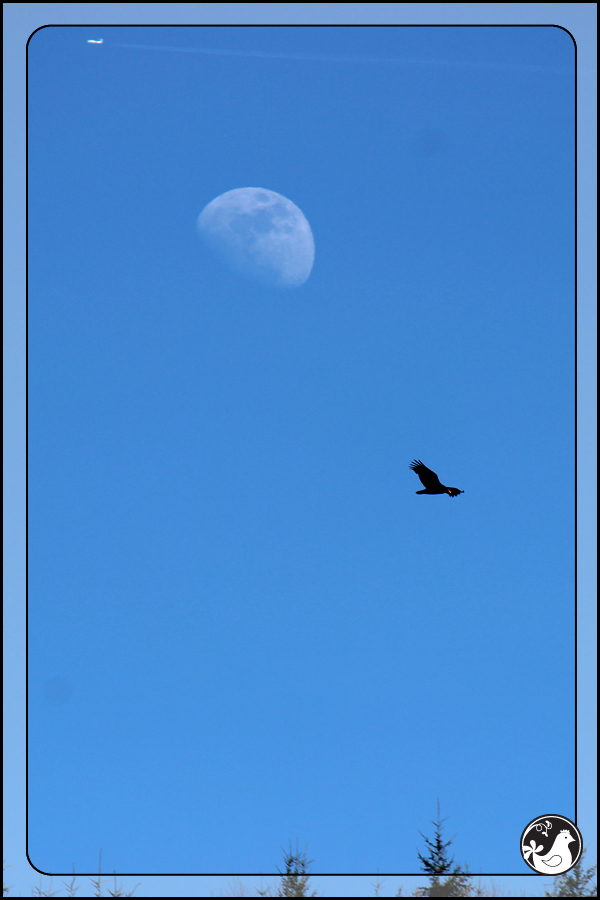 April has been a busy month for outdoor projects! Yippey! I love this time of year.