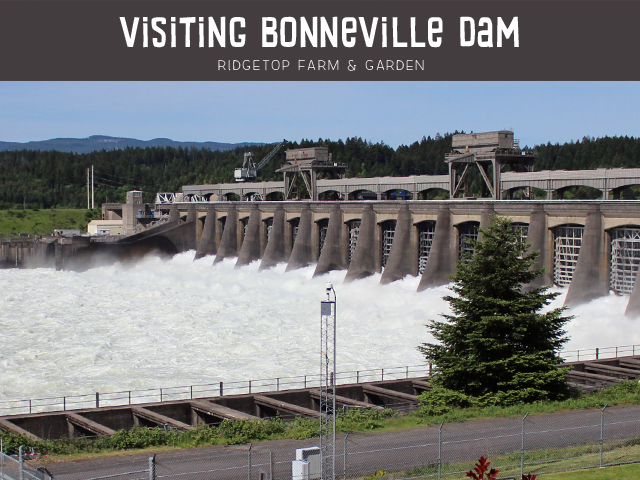 On a recent trip to the Columbia Gorge, we stopped at Bonneville Lock & Dam. It is located about 40 miles east of Portland, on the Columbia River between Oregon & Washington. Construction of the lock & dam was complete in 1938. A second powerhouse was operational in 1981. The lock & dam are used for river navigation & hydropower. In 1987, Bonneville Lock and Dam were declared a National Historic Landmark.

Bottom Left: Capt. Benjamin L.E. Bonneville (1796 – 1878)
Years after graduating from West Point, Bonneville set out to be a fur trader in the west. From 1832 – 1835 Bonneville explored much of what later was the Oregon Trail. He worked for an American man that was a rival of the very large Britain-based Hudson’s Bay Company. HBC had a trading post we visited at Fort Vancouver and, at the time, the trader’s from HBC were not allowed to trade with the American fur trappers. Although the fur trading didn’t go well, Bonneville’s expedition wasn’t a complete failure. He took extensive notes on agricultural areas, timber & fur trading in the west.
As stated in the photo, Bonneville returned to the Pacific Northwest in 1852 and was one of the first to recognize the waters of the Columbia River could be controlled for human benefit. 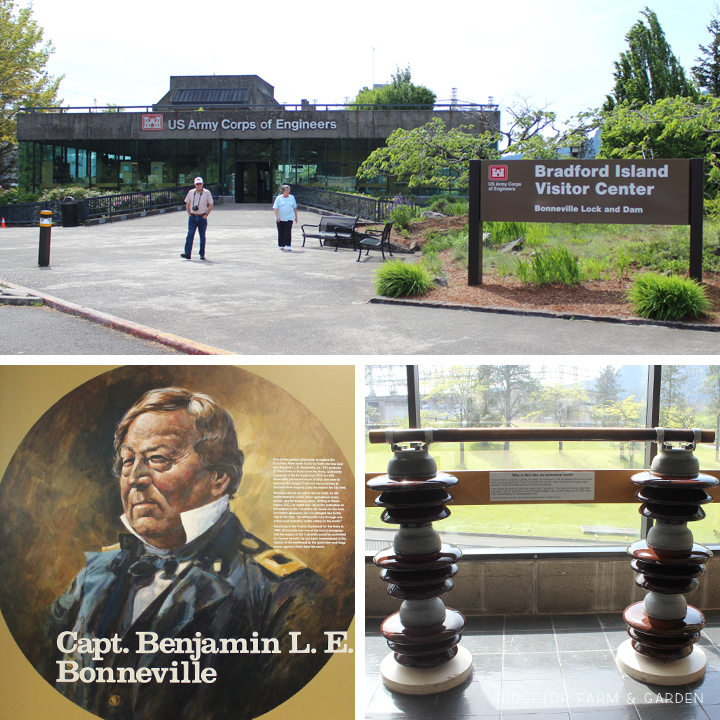 Fish Ladder
We got an underwater view of the fish swimming in the fish ladder.

There’s no guarantee that there will be fish migrating through the day you visit. I’m glad we got lucky when we went.

Workers at the dam use the underwater viewing to count the fish coming through the ladder. Biologists use this information to track fish runs. 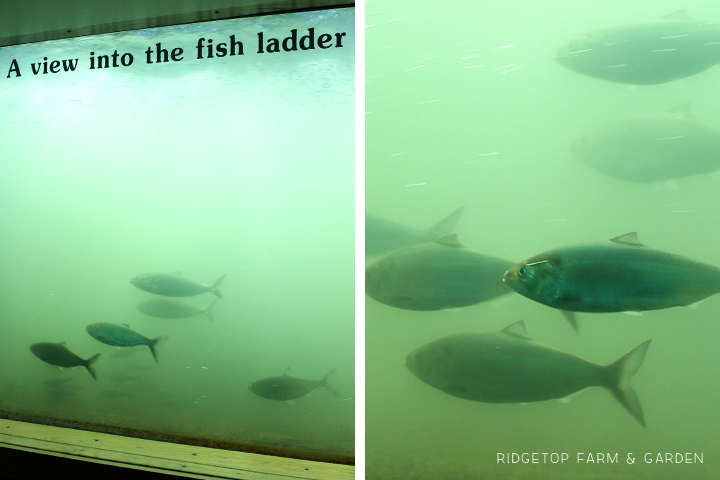 Sketches from the Corps of Discovery
These two fish photos are in almost every museum we’ve visited that have anything to do with Lewis & Clark. They are reproductions from their journals.

Left: White Salmon Trout (or Coho Salmon), by William Clark
Excerpt from Lewis’ Journal, March 16, 1806
“The white salmon trout which we had previously seen only at the great falls of the Columbia has now made it’s appearance in the creeks near this place. One of them was brought us today by an Indian who had just taken it with his gig…”

Right: Eulachon (or Candlefish), by William Clark
Excerpt from Clark’s Journal, February 25, 1806
“I purchased of the Clatsops this morning about half a bushel of small fish which they had caught about 40 miles up the Columbia in their scooping nets. As this is an uncommon to fish to me and one which no one of the party has ever seen. On the next page I have drawn the likeness of them as large as life…”
“I found them best when cooked in Indian style, which is by roasting a number of them together on a wooden spit without any previous preparation whatever. They are so fat that they require no additional sauce and I think them superior to any fish I ever tasted…” 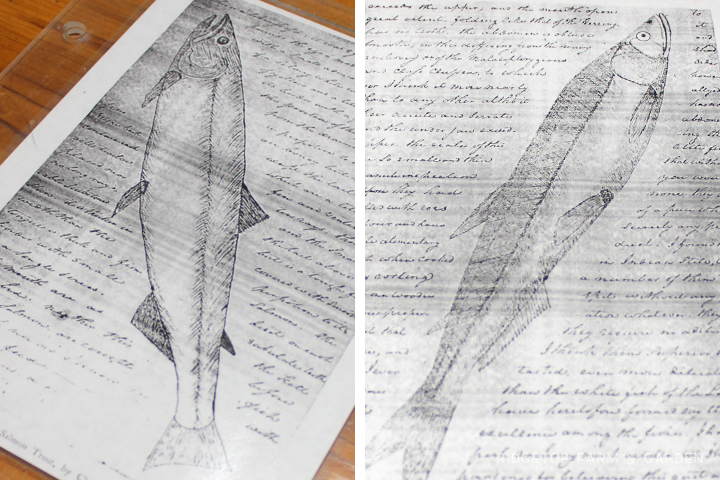 Learning via Computer
Downstairs, near the fish ladder viewing, was lots of info about fish & their migration patterns. The kids, of course, thought the information gained through use of the computer was best. 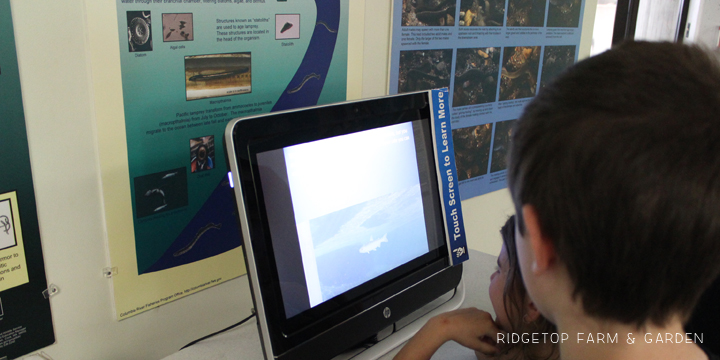 OUTSIDE THE VISITOR CENTER

Bonneville Powerhouse
To get to the Visitor Center on Bradford Island, you have to stop at a security checkpoint. Then, the road continues on right over the powerhouse. I’ll admit it gave me a slight case of the eebie-jeebies. 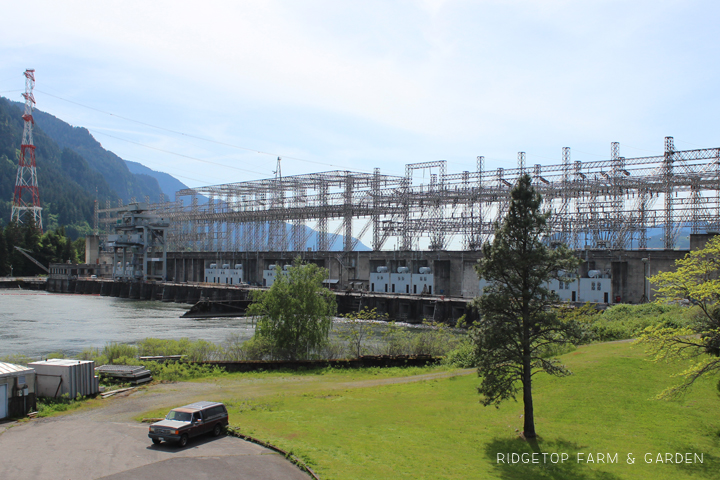 Fish Ladder
Fish ladders are used to get adult fish heading upstream passed the dam. The fish swim & jump up the ladder similar to the way they swim & jump up rapids of a river. Common fish that use the ladder are Chinook salmon, steelhead, shad, sockeye, lamprey & sturgeon.

We watched fish going up the ladder for quite awhile.

Bottom Right: The darkish blob is a jumping fish. Getting a photo of the fast moving fish in the rushing water was difficult. 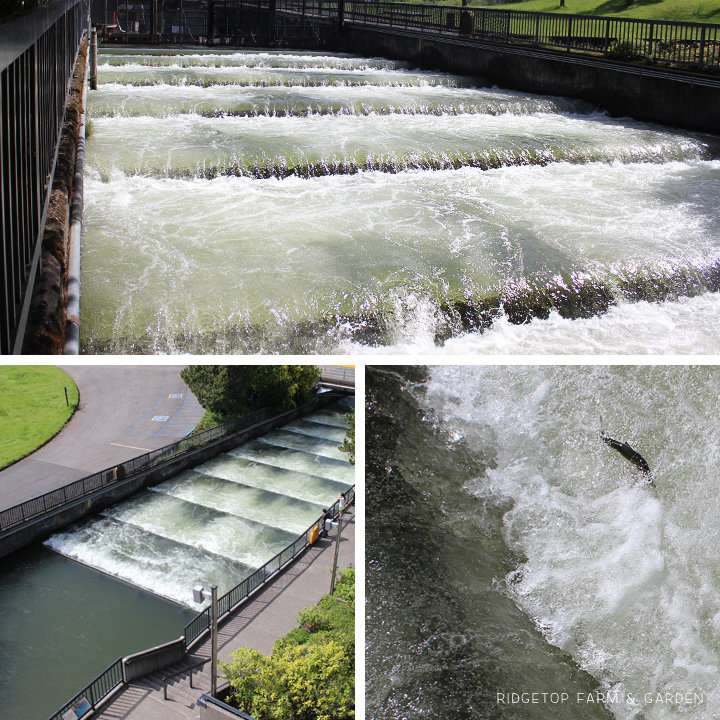 Old Turbine
This gigantic turbine was in use for 60 years. It helped create power for 25,000 homes. 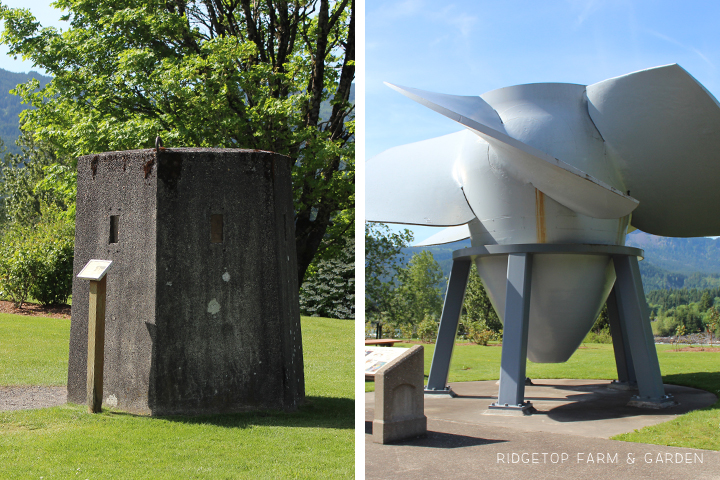 The Spillway
The spillway was open the day we visited, allowing water to gush through. This water is not used to produce power. It is used to let young migrating fish through to continue their journey to the ocean. Sometimes, after very wet winters, the spillway is open to let more water flow downstream. 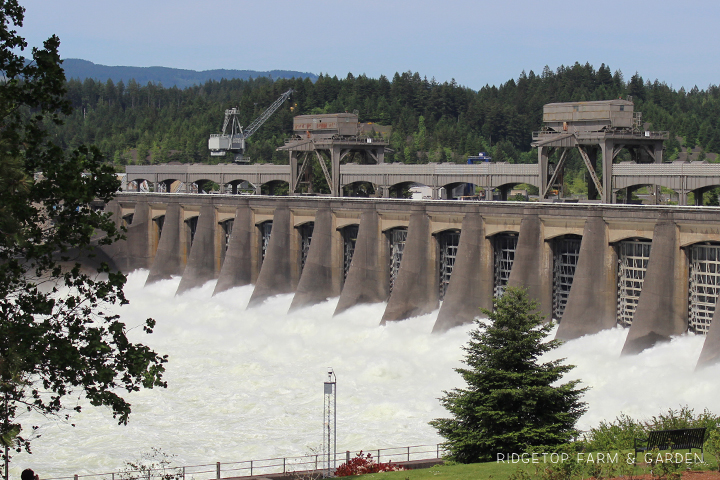 I left the dam with very mixed feelings. I love what an engineering feat it is. It truly is amazing, even though a lot of the mechanics go way over my head. I truly am grateful for the energy it produces. I certainly don’t want to live without my lights, microwave or computer. The thought of not being able to charge my camera battery… eek!

I’m also impressed there is so much thought going into helping the declining number of salmon and other fish survive our human ways. Yet, I feel guilty. We’ve done quite a bit to mess with nature’s course of events. Fish waiting to go up the fish ladders often become a sea lion’s dinner. That has become such a problem that they now kill some of the sea lions. The same fate is waiting 16,000 cormorants next spring. I once was a scuba diver and had an interest in fish and sea mammals. I hate to see any of them killed on purpose. In more recent years, I’ve become a birder. I also hate to see such a huge number of birds killed. I don’t know what the solution is. But, it does give me something to think about.

Well, I hate to leave as a Debbie Downer. We really did learn a lot while visiting the dam. I think we’d all agree, our favorite part was watching the fish in the fish ladder. I’d actually like to go back, learn more & see the lock.