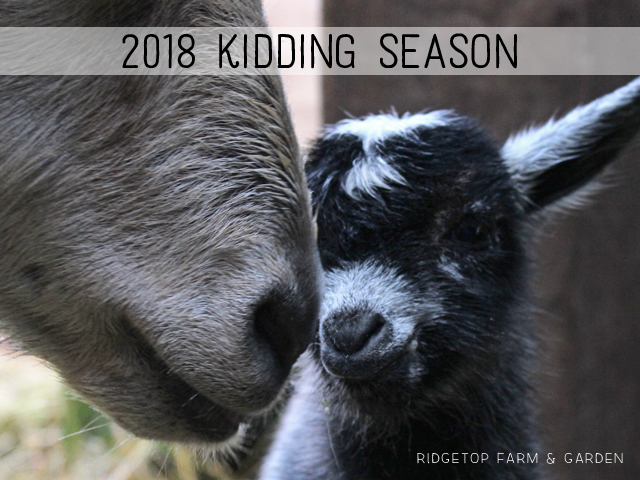 We had three does due to kid the end of February to the beginning of March. Thankfully, all three mamas did great and we had a problem free kidding season.

We had such a mild winter with barely any snow, so I was hopeful the births would happen snow free. Nope. We received the most snow of the entire season during those couple weeks during kidding. The only snafu this caused was that we couldn’t use one of the kidding pens I planned to use. 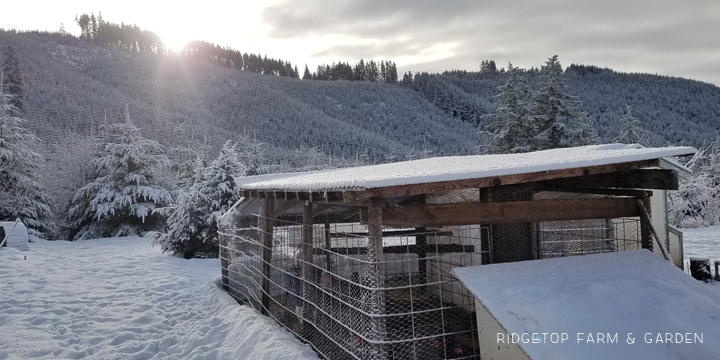 Bunny surprised me just a little by having her baby a couple days sooner than I was expecting. She was in her kidding pen, though, so all was good. I was also a bit surprised that she had only one baby.

Farm Girl heard a goat making a horrible sound, when she investigated she noticed Bunny was in labor. We got to the barn just as Bunny birthed her little boy. We watched and watched expecting her to have another. After half an hour, both Farmer John & I checked her using the bouncing method and decided there were no more babies. 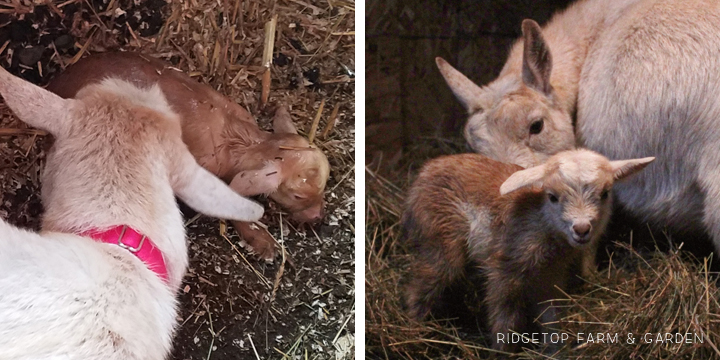 Because the temperature was below freezing I made the buckling a goat coat using fleece I had in my stash. 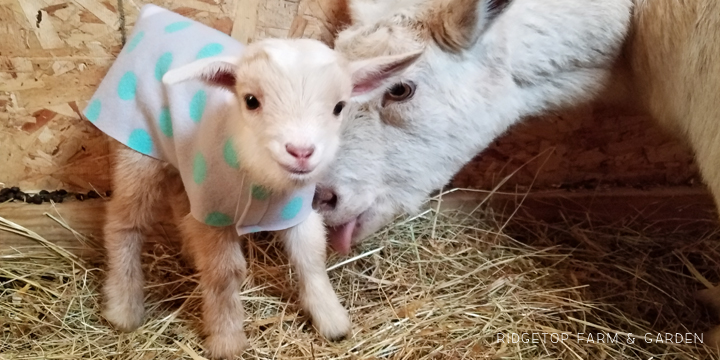 He was born on our friend’s birthday, so we started calling him Frankie. This worked out perfectly since one of my new favorite show’s is Grace & Frankie. 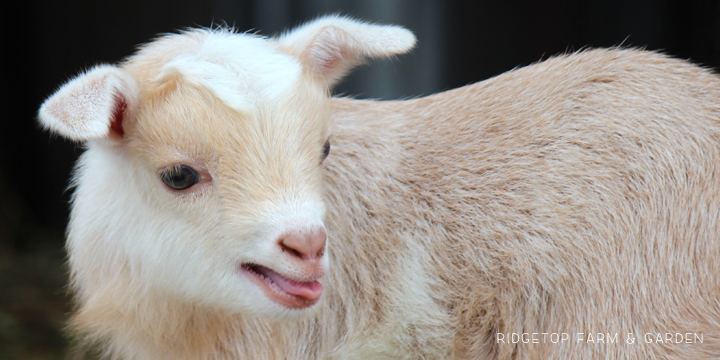 She would have had her babies out in the snow. And, it’s all my fault.

I wasn’t expecting her to kid for another few days so I opened the stall door in case she wanted to go outside. She did. As I was about to go back inside the house I decided to check her backside for any indication that labor might be close. I noticed her vulva was a different shape. It had been puffy. Now it wasn’t puffy, but it was elongated. I right away brought her back into the barn and shut the door. I wasn’t expecting things to progress as quickly as they did, but I was hoping the change meant she was close.

Since Georgia had a change, I walked over and checked Willow. She did not have any noticeable changes, so I went back to peek at Georgia. Holy Guacamole, she was in active labor! She was laying down in obvious distress making a horrid sound. 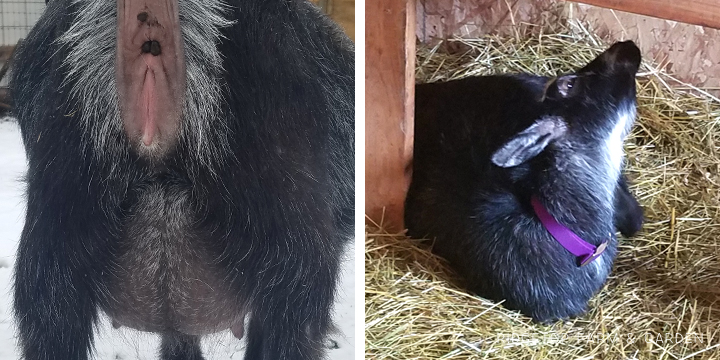 I literally turned around, walked a couple feet, and grabbed the goat cam. Within those few seconds she pushed out her first baby – a boy. I stood there in awe and within another minute or two she delivered her second kid. This time a girl. It happened so quickly, I’m not even sure she knew she had another baby. 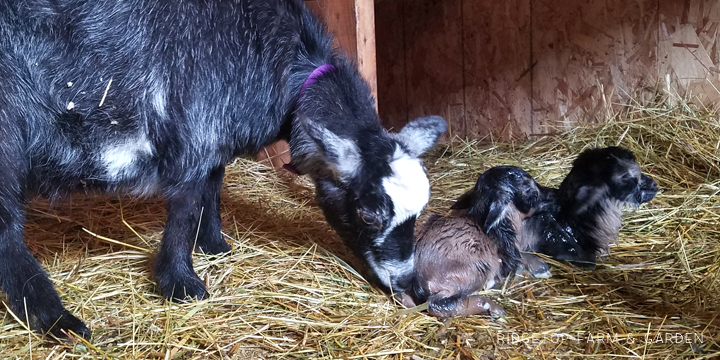 Doe on the left. Buck on the right. Their markings are incredibly similar, but the little girl’s tan areas are darker and redder than the little boy’s. 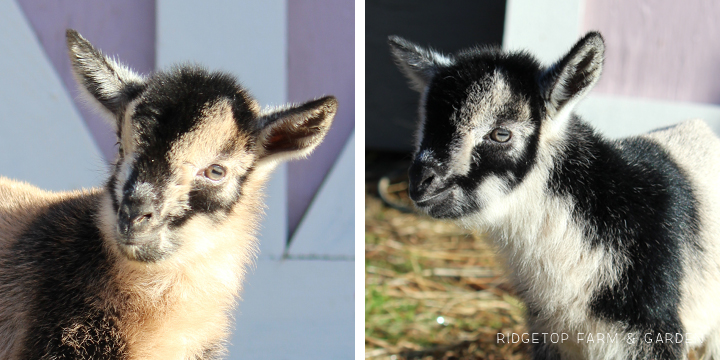 Georgia was a first freshener, so I was slightly concerned about how she would do during labor. She did fabulously. Below is her labor video.

I was getting a bit nervous about Willow. I was expecting her to kid over a week sooner than she did. For the most part, she didn’t seem in distress. But, there was a time two days before she delivered that I thought for sure she was in labor. When I checked her, her vulva was actually open a bit. Then later she was laying with one leg out obviously uncomfortable. A couple hours later – nothing. She went back to her typical self.

The next day – nothing. No indication that something was wonky the day before or that labor would happen soon.

The next morning, before taking the kids to school, I checked on her. I noticed nothing.

By the time I got back from school, she had 3 babies. I was so relieved! 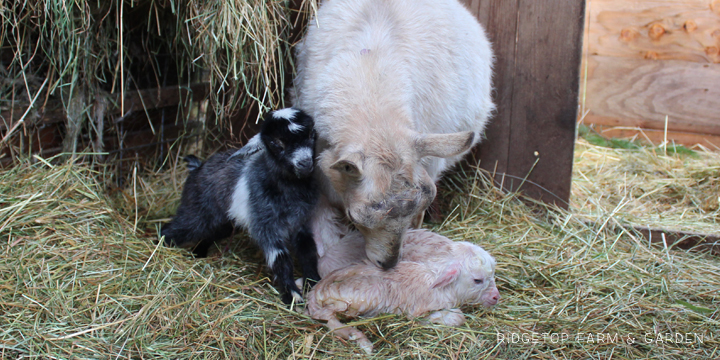 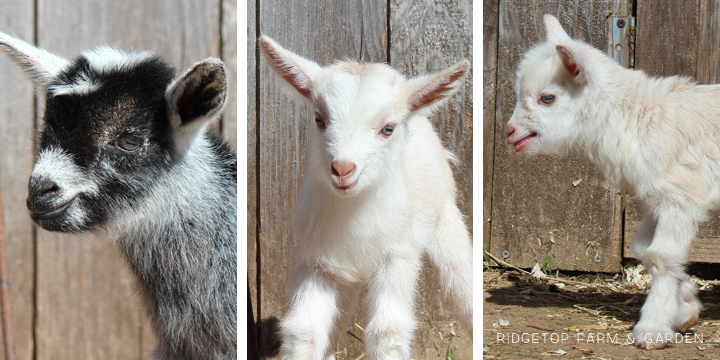 I did get video of Willow’s birth. But, since the little rascal opted to have her babies in the short amount of time I was not home, the video is all from the goat cam.

This was our second kidding season. Last year we missed Willow’s birth by just minutes also. So this year I was determined to learn how to know when a goat is nearing labor.

I researched the topic and put up camera’s so I could watch their every move. I watched a ridiculous amount of Goat TV searching for signs that labor was near.

What I learned is that no amount of Goat TV will really give an indication of when labor is near. None of my goats gave early signs. I even went back and watched video prior to their labor’s searching for signs. Virtually nothing. One time Bunny pawed at the ground – big deal, Moon paws at the ground or backs of people and other goats all the time and she’s not even pregnant. Willow had a bit of excitement, but that was two days before she gave birth. I already knew she was close, so that didn’t really tell me anything I didn’t already know – expect cause me to worry something might be wrong.

None of the typical signs happened until they were in active labor. I was hoping for signs a little sooner.

I need more practice before the tail ligaments give me a clue to labor being near. I started feeling what I thought were their ligaments about a month before they were due. Unfortunately, I didn’t notice much of a change. Willow and Bunny’s may have been getting softer, but not so much that it was a clear indication of labor. And, Georgia’s always seemed loosey goosey to me.

I will continue my labor sleuthing skills next year.

I am incredibly thankful for the seemingly easy, trouble free births. We have 3 mama’s who did great and a total of 6 healthy babies.