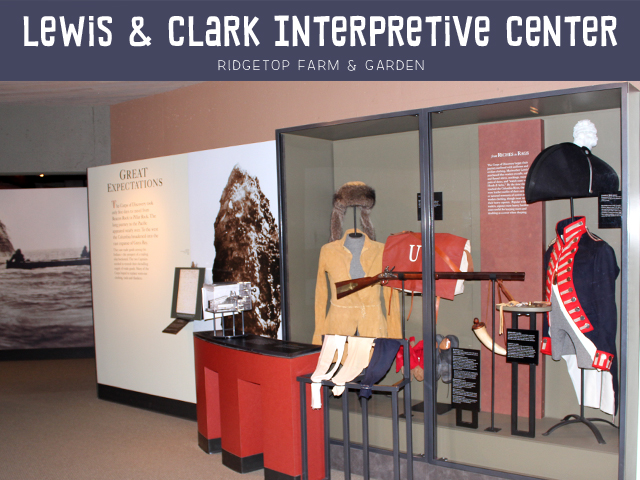 As part of our Moving West unit, we are learning about Lewis & Clark. We spent part of the weekend exploring the Lewis & Clark National & State Historical Parks in both Oregon & Washington. This is along the Pacific Ocean, the final destination of Lewis & Clark’s Expedition. At Cape Disappointment we toured the Lewis & Clark Interpretive Center. 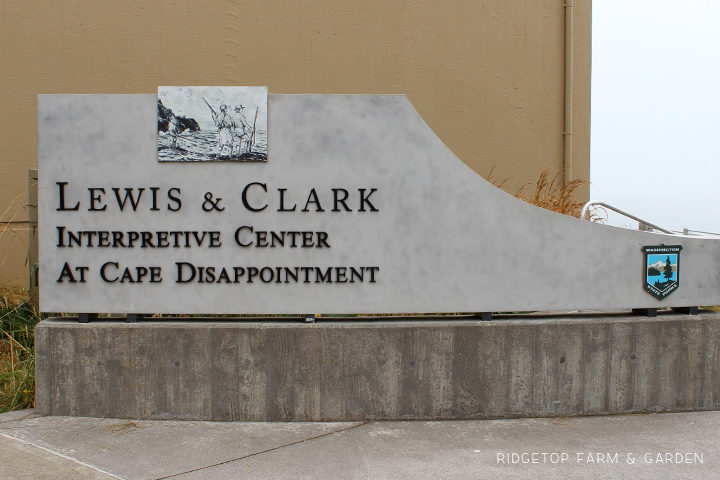 The Lewis & Clark National & State Parks are within the beautiful old growth forests of the Pacific Northwest. 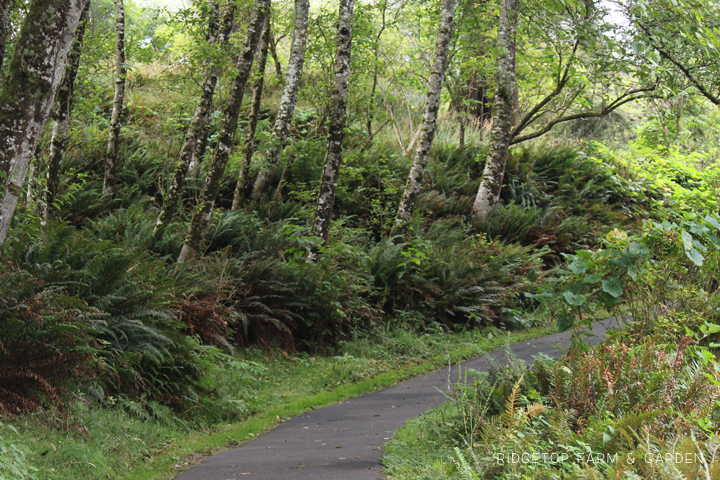 Lewis & Clark’s team, The Corps of Discovery, carried a 15 star & 15 stripe flag (similar to this one) on their expedition. By the time Lewis & Clark went on their adventure (1803) there were 17 states, but the flag hadn’t been redesigned yet. 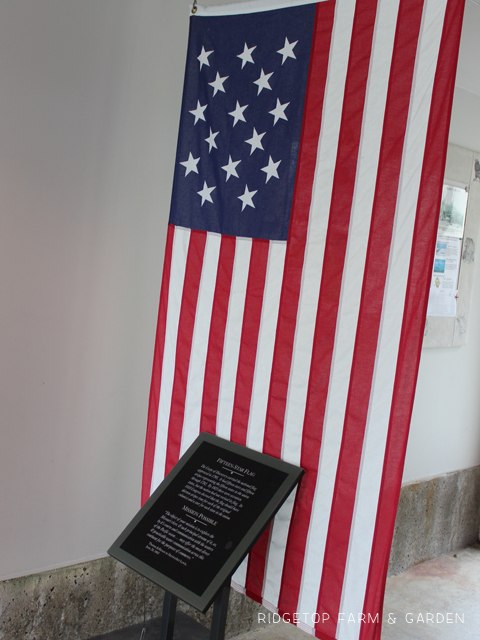 A half scale replica of the dugout canoes used by the Corps of Discovery. 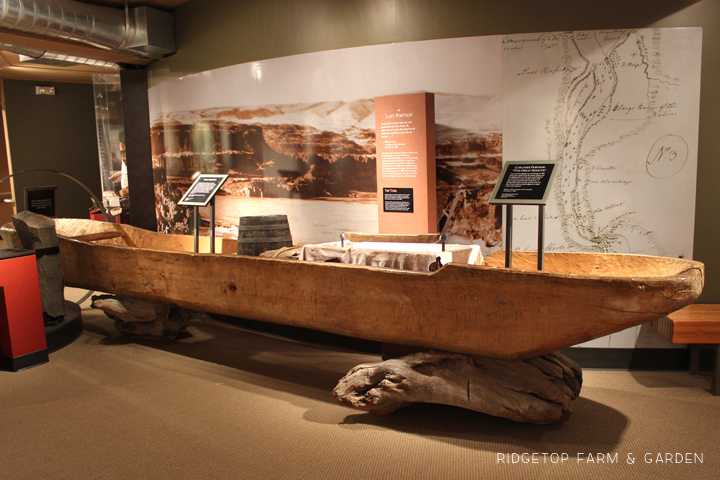 There were many hands on activities, which of course, my kids loved. This one is trying to stack a canoe with as many supplies as possible without tipping your boat. The Corps of Discovery had to repack their boats daily. 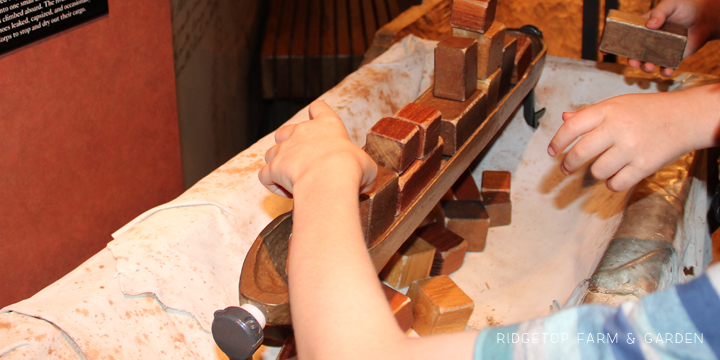 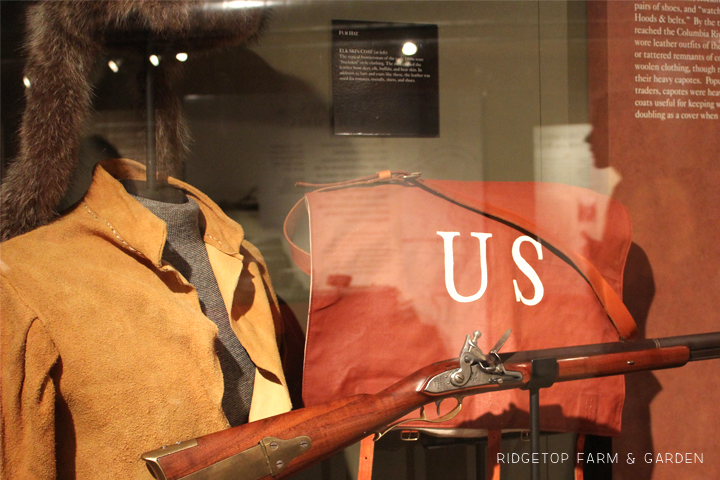 The Corps of Discovery encountered 24 different Indian tribes on their journey, including the Chinook. 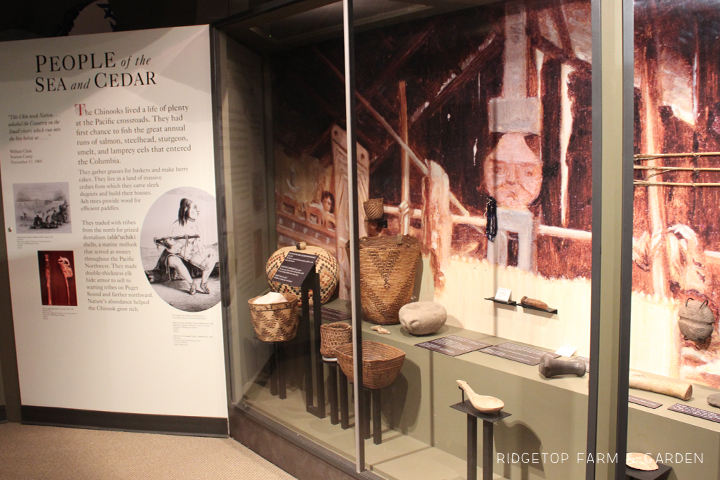 Left:  The Interpretive Center also had examples of the journals kept by the Corps of Discovery.

Right: Once the Corps of Discovery made it to the Pacific Ocean they needed to decide the best place to spend the winter. 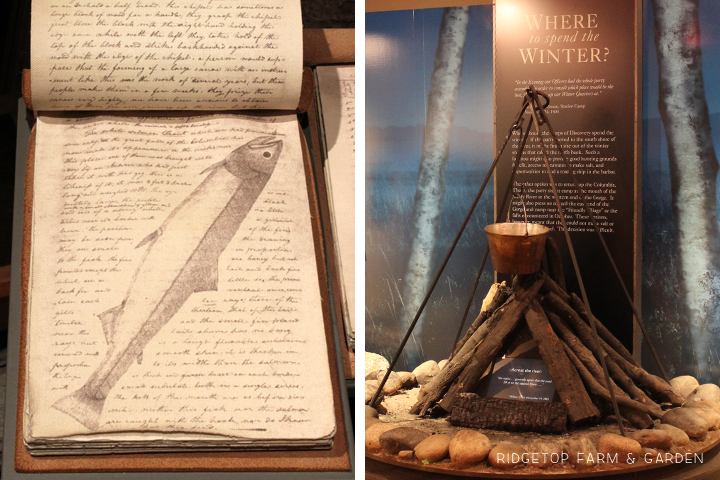 The items in this case belonged to Patrick Gass, a member of the Corps of Discovery. On the left is the flask he used. To the right is a wooden razor box believed to have been carved and given to him by Sacagawea.

More amazing to me than the items in the case, though, are the words around the case on the right. It says each of the men in the Corps of Discovery received 320 acres of land & double pay. Lewis & Clark each received 1600 acres and double pay. York and Sacagawea got nothing. Zilch. Nada. I know this was a sign of the times. But, it’s still awful. Obviously the US government was happy with their expedition for the men to receive double pay plus land. It’s appalling that the time, effort & sacrifice from an Indian Woman and a Black Slave weren’t compensated in the same way. 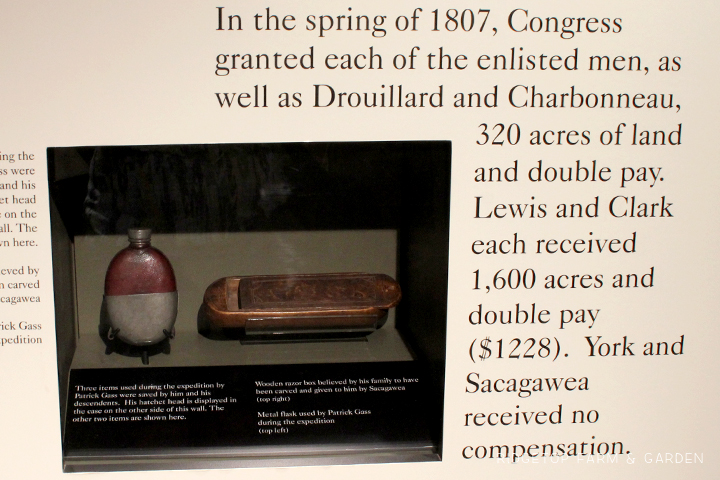 Sacajawea at the Big Water by John F Clymer 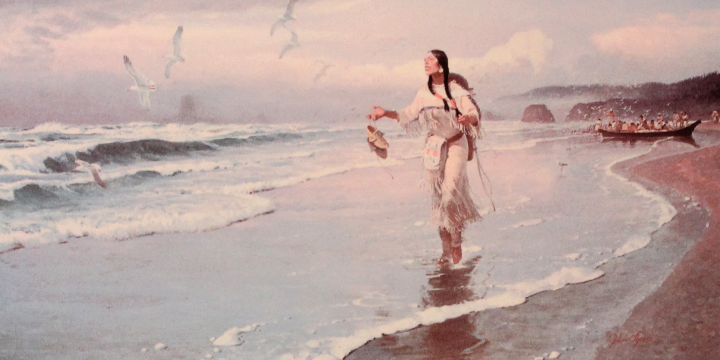 The end of the exhibit had pull drawers describing what happened to each member of the Corps of Discovery. York got his freedom sometime after 1811. 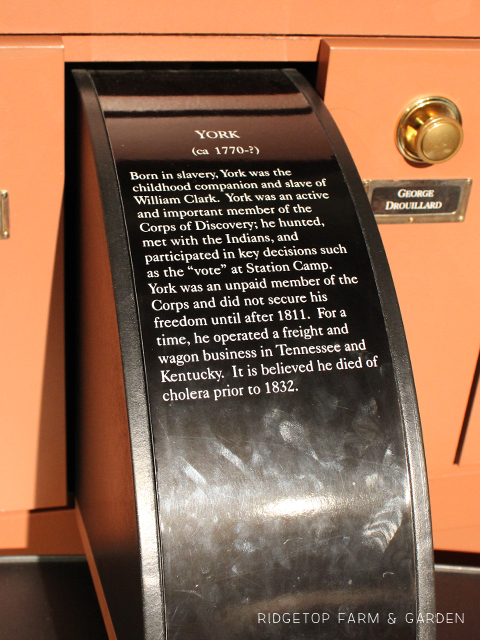 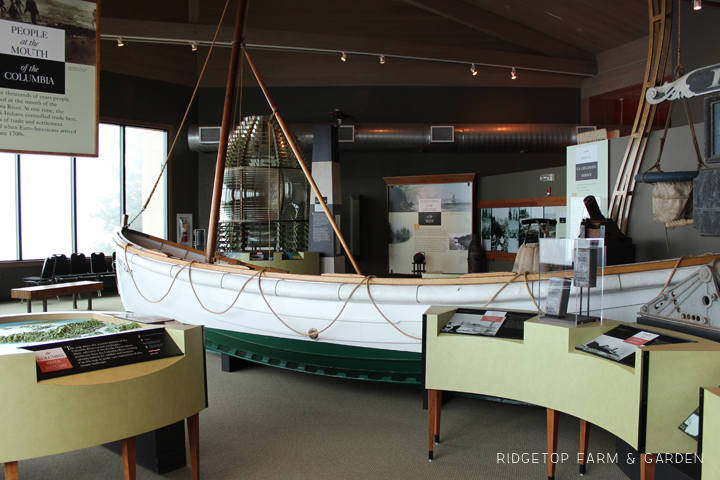 A 3-D map showing where the fresh water Columbia River meets the salt water of the Pacific Ocean. Cape Disappointment is on the Washington side of the river. You can just barely see the You Are Here arrow in this pic. 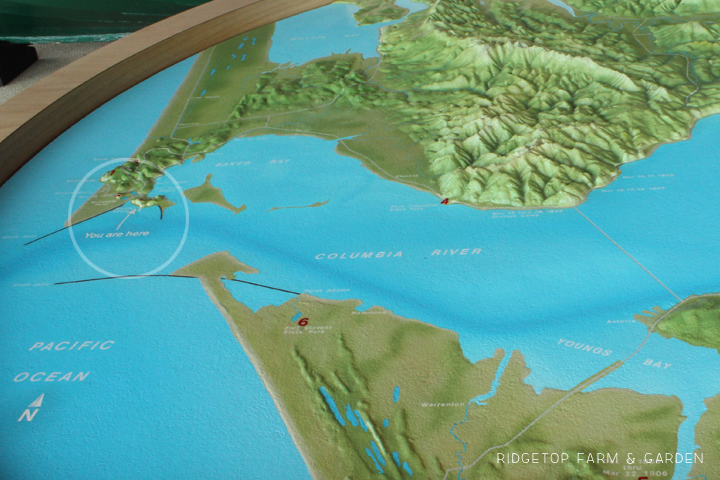 Bottom Left: The words “Welcome to the Edge of the Continent” amaze me . I have lived near the Pacific Ocean all my life and I take it for granted. I can’t imagine the joy the Corps of Discovery felt when they first saw it.

Bottom Right: The Interpretive Center sits back on a rocky ledge. Many cormorants live on these rocks. 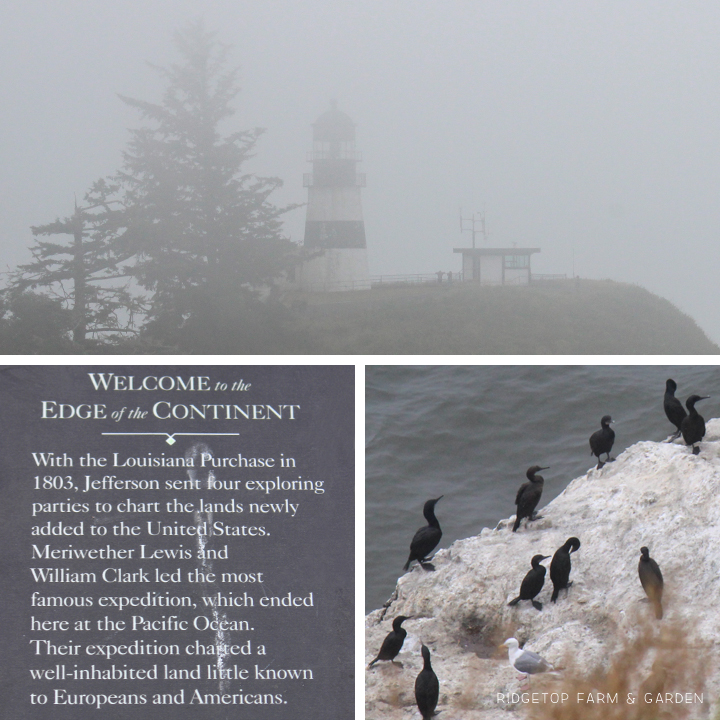 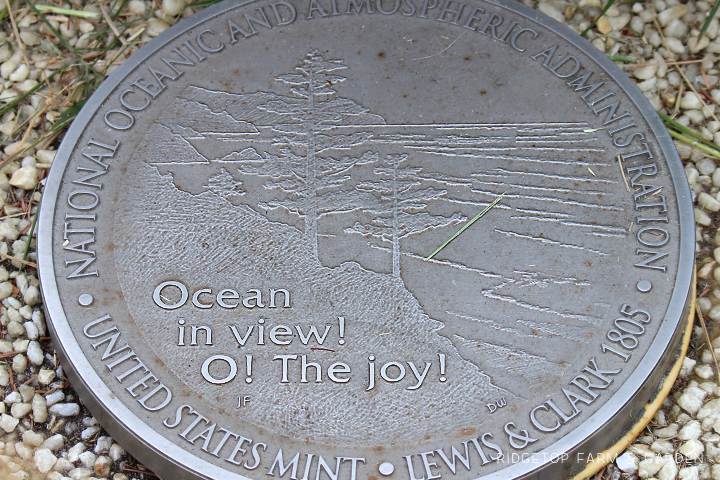 The Interpretive Center sits where what once was Fort Canby. The fort was built to defend the Columbia River from enemy warships. The US Army was here from the mid 1800’s until the end of WWII.

I love the field trips as much as my kids. I always learn something new & it’s always a great excuse to go see something we wouldn’t normally get to see. We drove across the crazy-steep, then low to the water Astoria Bridge. Made it to the edge of North America. Walked through an amazing old growth forest. Saw a lighthouse in the fog, making it a great time to show the kids why we have lighthouses in the first place. Explored an old army fort. Saw a bald eagle! We learned that the white stuff on the rocks with the cormorants was guano. The kids loved that. We experienced all this and more while the intent was to simply learn a little something about Lewis & Clark. I’m already plotting when we can go back & make a bigger trip out of it.