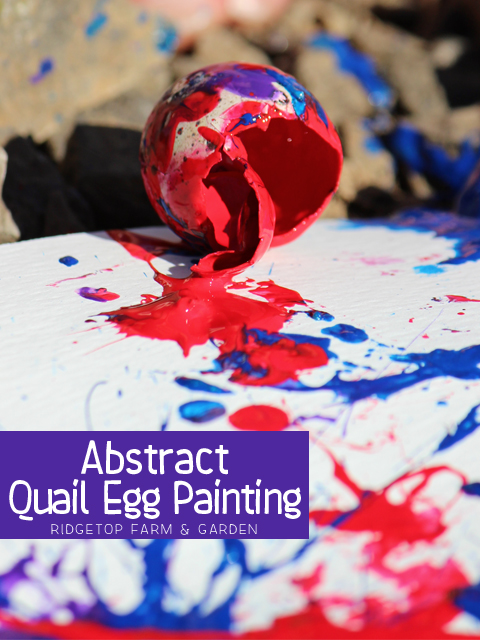 Today the kids argued with each other far more than I could take. So, I came up with a project that entertained them at least for a little bit. Farmer John had been saving some of our quail eggs with the hopes of incubating them. I know some of them, though, had been layed more than 10 days ago. We don’t put eggs in our incubator that are more than 10 days old. So instead of just throwing them out, I repurposed them. They held the paint for our abstract art.

First step was to open the egg. I used a knife to carefully break the egg near the top. I tried to not break the entire top off, so I could use it as a lid once I filled the egg with paint. I emptied out the egg white & yolk and rinsed the egg with soap & water.

Next I squeezed paint into the quail egg. I also added a smidgen of water hoping it would make the paint a little thinner & splatter better. Because everything is better if it sparkles, I also added glitter.

Then the kids got to throw the eggs. The eggs were actually kind of difficult to break & splatter the paint. They had to throw them pretty hard & sometimes throw it again.

We used watercolor paper. I told the kids to do their best to throw the eggs at the center of the paper, so as much paint as possible stayed on the paper. Most of the paint did stay on the paper, but some also splattered onto the gravel. I’m not sure how they managed it, but all 3 kids ended up with a little paint in their hair. 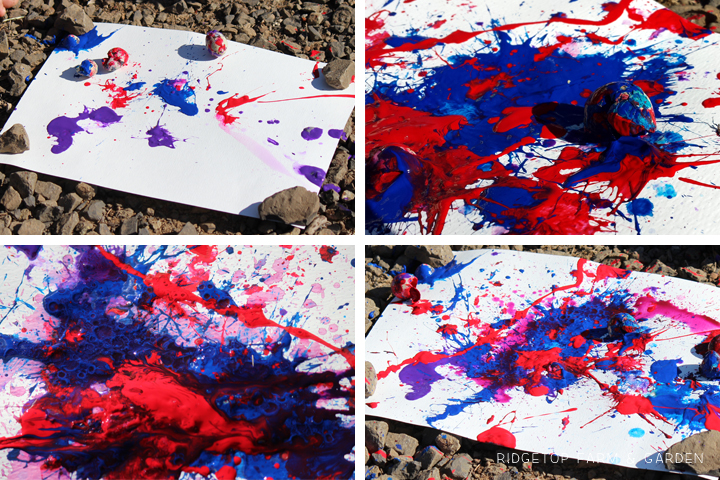 This was so simple, yet because it was messy & involved throwing something the kids loved it. We always have plenty of eggs, so I’m sure we will try this again.