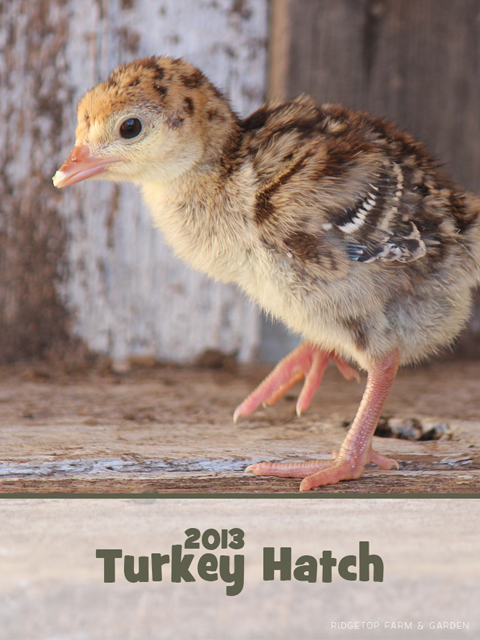 Hatching turkeys wasn’t in our immediate plans, but then Farmer John found where our year old turkey hen has been laying her eggs. We could have just left them for some critter to eat or we could see if any would hatch. We chose to try hatching them.

We set 7 turkey eggs in the incubator with chicken eggs that had already been in there for a few days. We knew from the beginning that we would have a little problem when it comes time for the chicks to hatch. Chicks take 21 days to hatch. Turkeys take 28 days, plus the turkeys were getting a later start. We didn’t want the turkey eggs in the incubator when the chicks were hatching. But, we didn’t know for sure if they were fertile or if they would develop. So, we decided to set them & worry about what to do if they actually developed.

To our amazement, 4 eggs were developing!

Three of the 4 eggs still looked good when it came time for our chick Hatch Batch #4 to go into lockdown. The 4th one looked like it had quit, but I left it anyway just in case I was wrong.

The turkey eggs had to move out of the incubator while the chicks were hatching, so Farmer John used his MacGyver skills to make a temporary incubator out of materials we had at home. The only thing we had to buy was a light bulb. 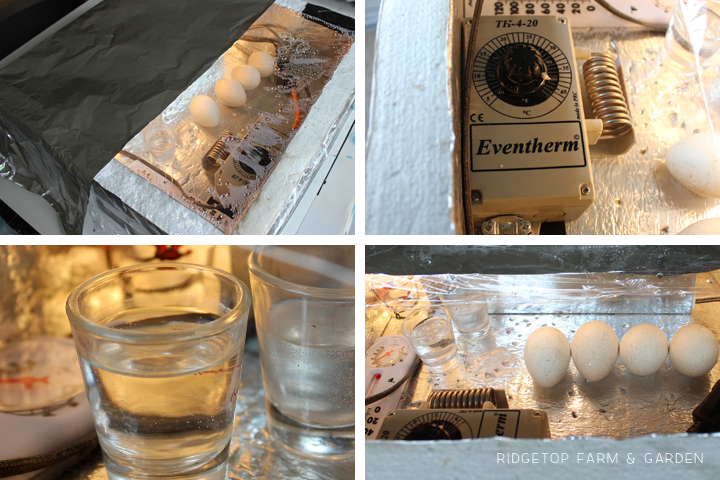 The thermostat was set to slightly less than 100°. The thermostat turned a light on when the incubator needed warming up & turned the light off when it reached the optimal temp.

We used shot glasses with water to raise the humidity.

Farmer John’s original plan was to put the same insulated foam from the walls on the top, but he didn’t have enough material. Instead, he made this super fancy top out of foil & saran wrap. It may seem kooky, but it worked. I was so nervous that this move to the new incubator was going to harm the developing turkeys.

After the chicks hatched we moved the turkey eggs back to the original incubator and placed them in the turner. I tossed the 4th egg that still didn’t look like it was developing anymore. 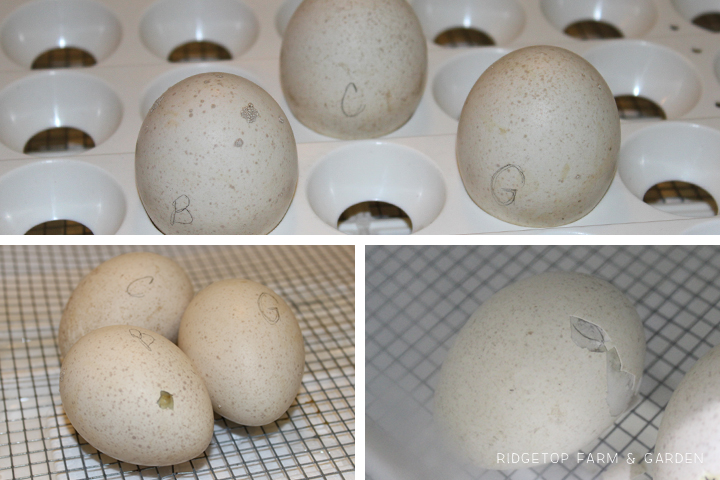 When it came time to take the turkey eggs out of the turner & ready them for lockdown I saw one poult had already pipped – but at the wrong end of the shell. I candled them before locking them down & there was movement in all three eggs! I was thrilled they had made it this far. I was surprised how heavy they felt compared to chicken eggs & I could feel the poult moving around inside the shell. 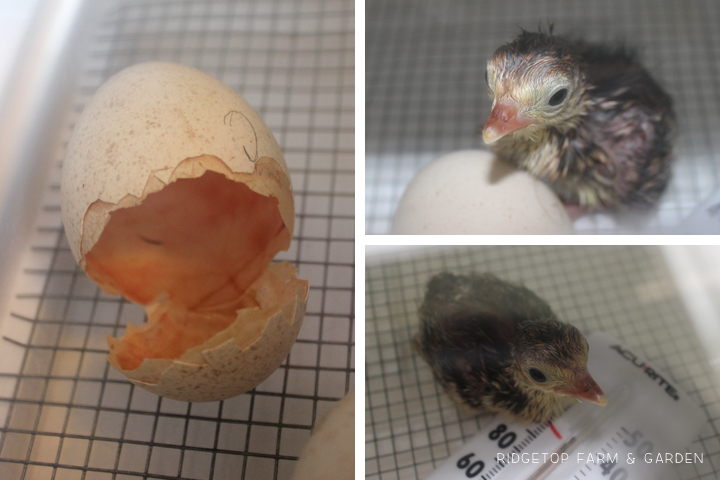 I was able to catch most of Egg C hatching on video. The egg wiggled & wobbled & peeped & cheeped.

Egg B pipped and on Day 27 we could see it’s beak breaking through the membrane. But late in the day on Day 28, it was no further along. It was wobbling like crazy in the egg & peeping, though. I finally convinced Farmer John to help it out. I know that’s always risky, but I knew it was still alive & didn’t seem to be making any progress. So, Farmer John carefully cracked around the shell & tore the membrane. For quite awhile it just layed there & I thought it wouldn’t make it. But, a couple hours later it was up & perky just like the other one. Egg G never pipped, zipped or peeped. 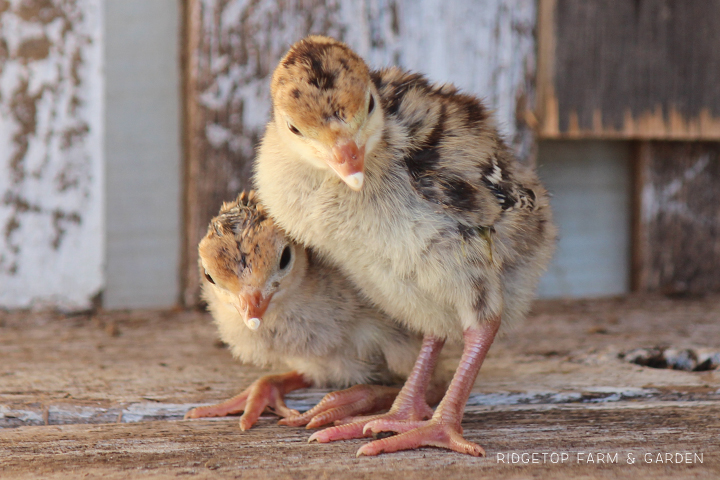 Our 2 hatched Turkeys! I am really hoping Chick B thrives, not just for me but for Chick C. Turkeys are social creatures, I’d feel bad if it didn’t have a friend.

Turkeys are hungry rascals, so I’m not sure how many we will hatch. We spent a small fortune on feeding them last year, but everyone has really loved the dinners from those turkeys. This hatch may have been a one time gig… or knowing us it may be only the beginning. Either way, I’m glad we tried it & we have 2 new turkeys.