Over the last few years weight has been creeping up on me. I gotta say, it really pisses me off. I used to go to the gym or take part in exercise classes. Since moving further away & having 3 kids, going to the gym is no longer realistic. I was hoping all the work it takes in owning 12 acres would be enough to take the place of going to the gym. Of course, it hasn’t been enough.

I can come up with many excuses to not exercise:
We’re too far from the gym. – We are. It’s not worth the gas money or time for me to drive to the gym.
I homeschool the kids. So, I very rarely have time alone to skip off to the gym. – True. Too true.
I can’t just go outside & run because we live on a steep gravel road. Also, the area around our house is lumpy, bumpy & often muddy. I would twist an ankle running outside our house. – Again, true, true & true.

Too be honest, all these reasons just started ticking me off. I had to come up with an exercise program that would work for me. So, in February I started running. I asked Farmer John to get me the elliptical machine I had just seen at Costco for Valentine’s Day. The nice guy that he is, bought it. I’ve been running on it ever since. I also try to squeeze in running outside at a park, sidewalk or track at least once a week when I’m already in town for one of the kids activities. Guess what? This is working for me. It is doable.

My goal when I started was to run a 5k. I can now do it. I’m slow, ridiculously slow, but I can do it.

One of the things I’ve been doing to keep me motivated is signing up for races around town. I know I would get lazy if I didn’t have an event to train for.

Earlier this month some friends & I did the novelty Neon Run. It’s not an official race with time chips, but it’s a fun event that gets friends & families active. 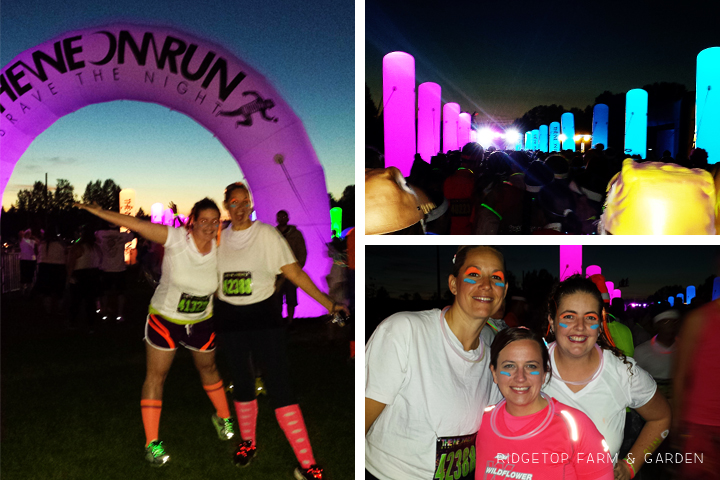 Left: My arm in black light.
Top Right: Along the course they had photo ops. I’m a picture person, of course we stopped for those.
Bottom Right: I am usually a fairly reserved person, especially in my clothes. I’m a jeans & tshirt type of person. And, not even cute jeans & tees. It was a lot of fun dressing up for this event. We had fun hair with glow in the dark extensions & l.e.d lights, glow shoelaces, bracelets & necklaces & make up the glowed in the black light. 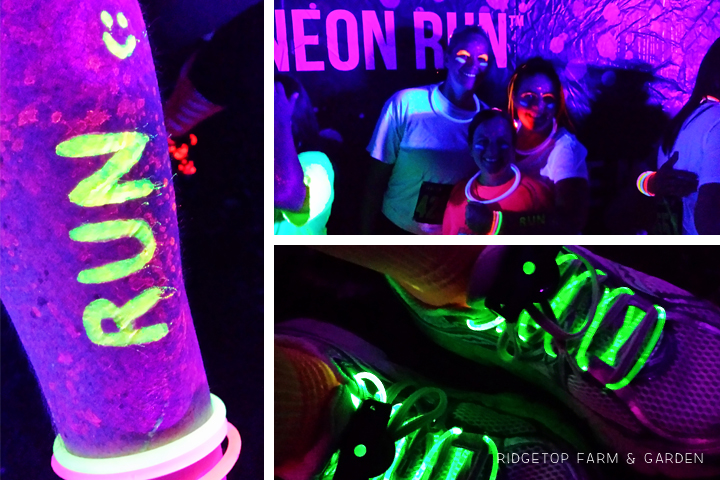 Left: The end. We made it… and we’re still smiling.
Right: I found another friend at the end of the race.
The event was a great girls night out. If you are a serious runner going for your personal best time, this probably wouldn’t be a race for you. But since I wasn’t going for my best time, it was low pressure & fun. 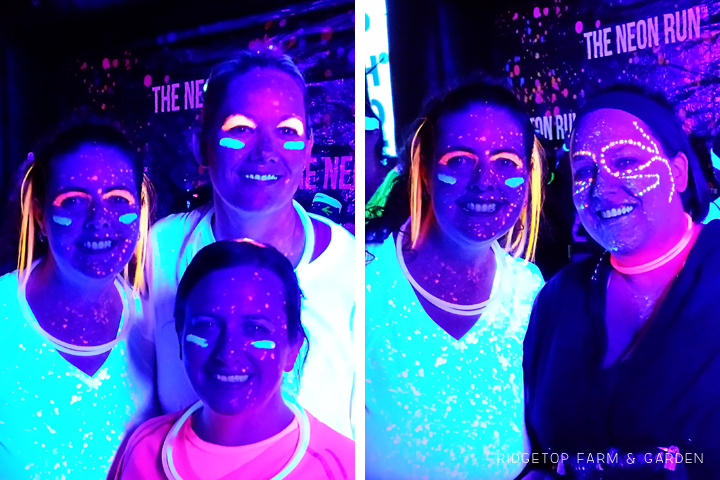 The race was at Portland International Raceway. The first half mile or so was terribly congested, even with staggering the start times. I couldn’t have ran my best time even if I had wanted to. The other weird thing for me was that it was a bit uncomfortable running on a gravel trail in the dark. The beginning & a few other points along the course were on gravel. I don’t mind running on gravel, but I didn’t care for it in the dark. Eventually we made it to the actual racetrack, which was fine in the dark.

There were 4 stations along the way that had people spraying us with colored water that glowed in the black light. FYI: I’m pretty sure I read on their website that the color would come out of your clothes. It didn’t. I soaked my shirt as soon as I got home. I put stain stuff on it in the morning, then washed it. Then did that again. My shirt still has pretty dots of color all over it. It’s not that big of a deal, just something to be aware of.

I should not let one twenty-something girl’s passing comment irritate me, but it does still irritate me. My friends & I ran & walked the race. Sometimes we ran, sometimes we walked. It just depended on how many people were around & how we felt. At one point when we were walking – and btw, we weren’t just casually strolling we were clipping along at a decent pace – a couple of girls ran by & one of them made a snooty comment to her friend about how she couldn’t believe that some people would actually walk. How dare her! First of all, I have ran an entire 5k & had I wanted to I could have done it that night. Second of all, even had I walked the entire thing at least I completed an entire 5k. How dare her judge somebody else for how they choose to get their exercise. As embarrassed as I am for admitting this, she probably weighed 75 pounds less than me. I’d like to see her run or walk a 5k with 75 pounds strapped to her body. I hope one day she matures a little.

I didn’t let Miss SnootyPants get me down & we finished the race. It feels so good to accomplish something. I remember when I first started running, I could barely run one mile. When I finished the mile, I was dang near dead I was so tired. Now I can go 3 miles. Although I’m tired at the end, I don’t feel like I’m going to die.

My running is improving & hopefully so is my health. The unfortunate thing is that I’m not losing any weight. I have not lost one pound since February when I started running. I am quite frustrated by that, but I keep running.