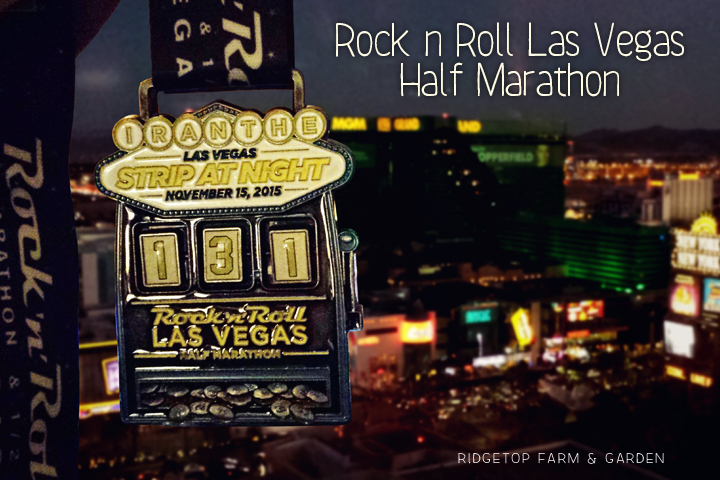 In May, I ran my first half marathon – it was the Tinkerbell at Disneyland. That was an accomplishment I was super proud about. Who knew I could do such a thing?

And now I can say I’ve completed two half marathons!

Besides a Disney event, the other event calling my name was the Rock n Roll half marathon in Las Vegas. I thought it would be a year or two before I’d do it, but it ended up working out to go this year. So, two RunCations in one year. Amazing! It’s getting slightly addicting. Somehow I convinced two of my very best friends to tag along with me. They aren’t runners, but they are always up for a girls weekend away.

It was a quick trip leaving early Saturday morning and arriving back home early Monday morning. We’ve all been to Vegas a number of times, so a quick trip was perfectly fine.

Believe it or not, the carpet throughout the Portland International Airport has become a thing. The old carpet was being replaced and it became a game to find sections of the old carpet and take a pic. The old PDX Carpet was even the Grand Marshal in the Starlight Parade and has its own Instagram hashtag. There’s not much left of the old carpet, if any at all, so our obligatory pic is with the new carpet. 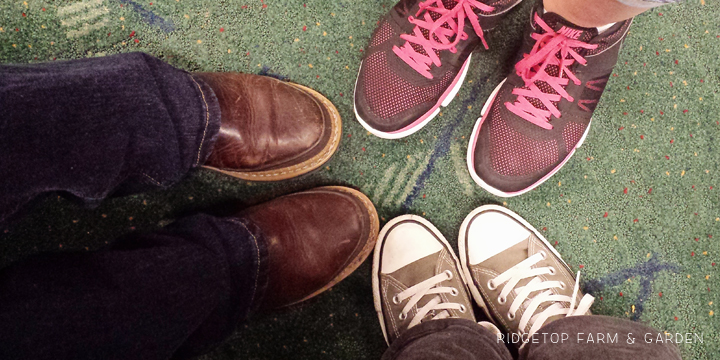 First thing we did once landing in Vegas was take the monorail to the Expo.

I grabbed my bib, bag and shirt – which was a simple process. Walked through the Brooks/Rock n Roll merchandise area. Bought a shot glass. Exited into the main vendor area. And left. I would have liked to check out the vendor area more, but I could tell my friends were bored already so we moved on. 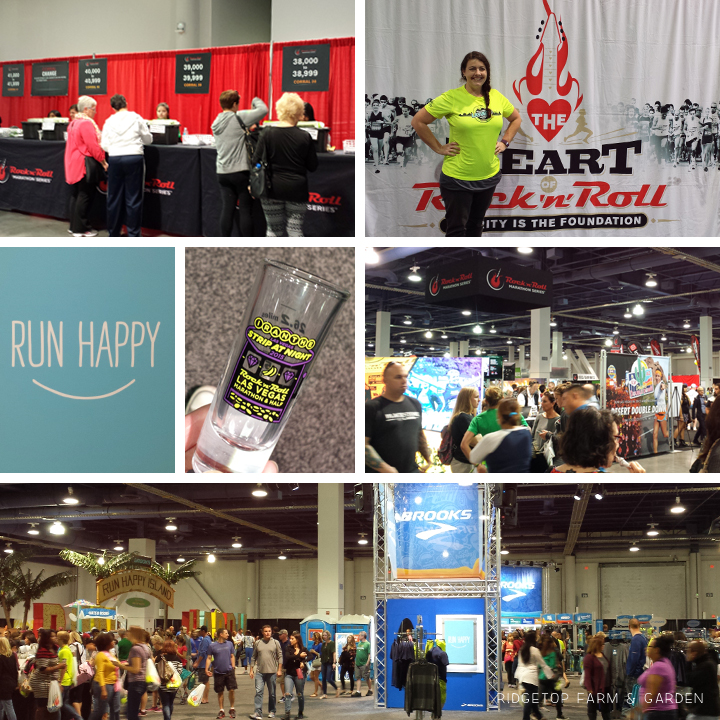 We spent the rest of the day and most of the next day wandering the strip.

The only extra thing I did was the CSI Experience. It’s in Vegas, so of course it wasn’t cheap, but it was a fun way to spend an hour. And, we did solve the crime. 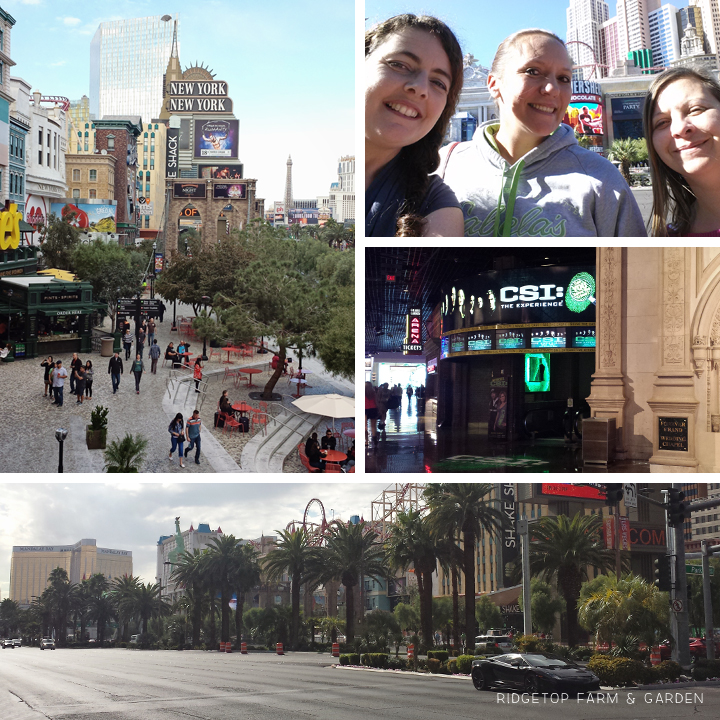 This was our first time staying at the Monte Carlo. I don’t have much to say about it. It was a typical Vegas hotel room. However, we did get one with a view of the strip – so that was freaking awesome. 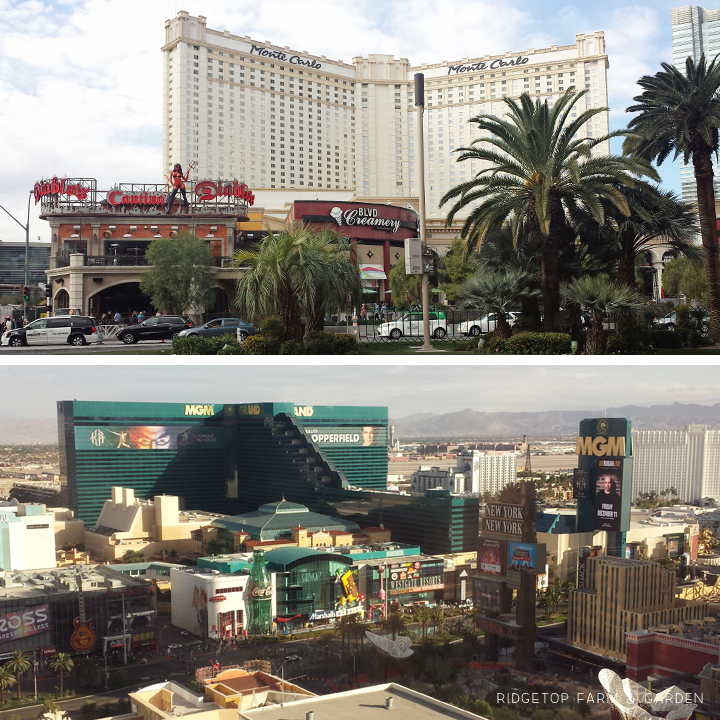 In my head I had a fabulously blinged out Vegas/Elvis costume planned. However, time and reality toned down the entire idea.

Here is what I ended up wearing – still Elvis inspired, but not so much in the bling department:
Shirt: From Kohl’s, with an added red “scarf” sewn on by me
Pants: Nike
Elvis Glasses: From Amazon 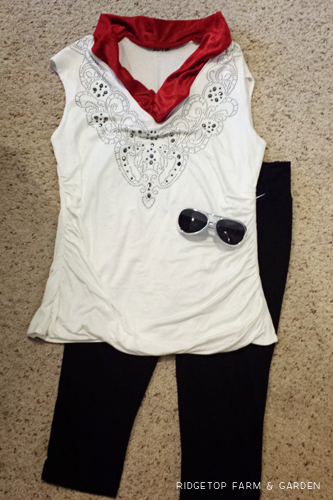 The strip was closed well before the start time, so many people walked down the road to the entrance. Many people, myself included, were taking pics standing in the strip with all the famous hotels in the background. 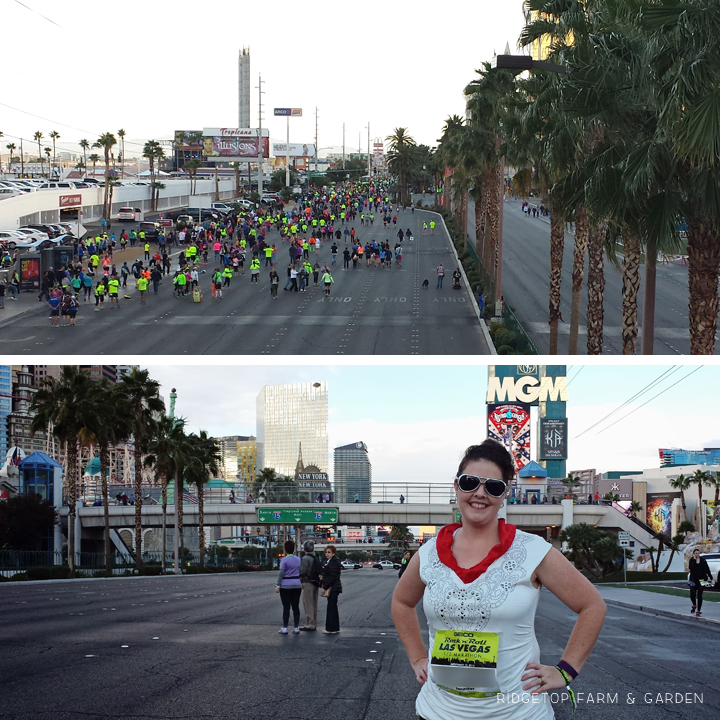 I got to the pre race area a little later than I would have liked, but it worked out fine. I watched the end of Kid Rock’s performance, tinkled, then it was time to head to my corral. 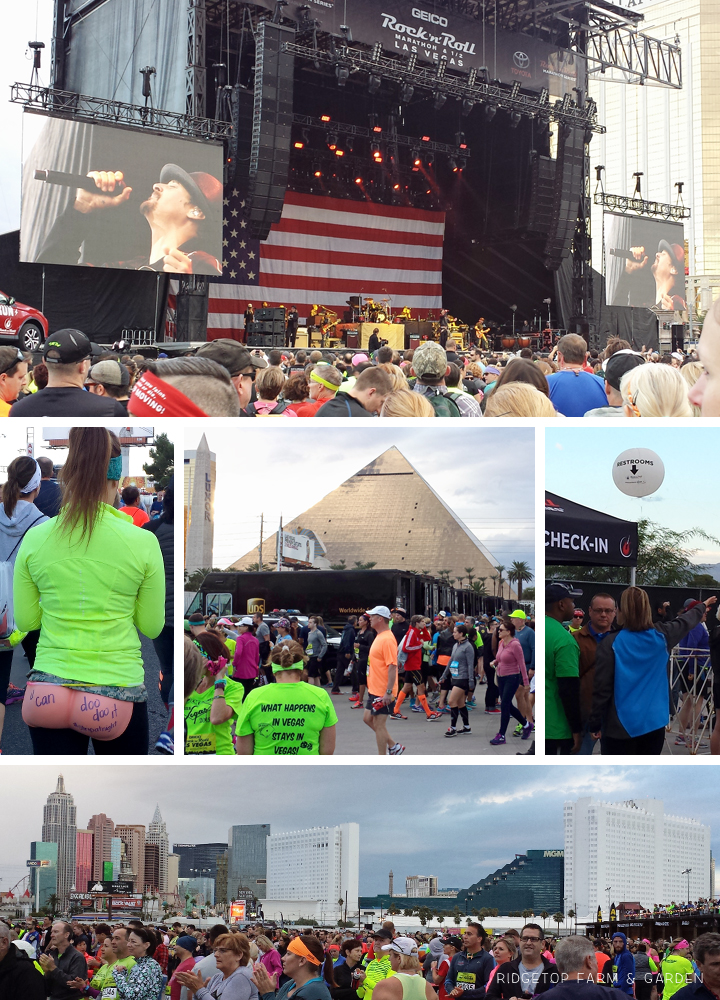 I knew these dark clouds rollin’ in couldn’t be good… 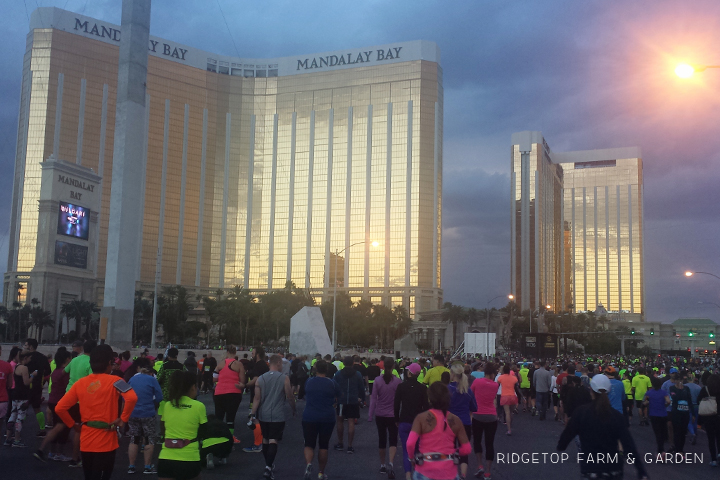 The official start time for the race was 4:30pm. However I was placed in corral 39, so I had a long wait until I made it to the start line.

Waiting is the worst part. But since I’m not fast, it’s expected and I usually am prepared for the wait. This time, though, it was particularly rough. I wasn’t dressed for cold weather (rookie mistake), and it was cold. Then the rain came. Not a drenching mass of pouring rain, but enough to make the cold seem even colder. Plus, I’ll admit, the rain just made me grumpy. I live in Oregon; I’m used to rain. But, I didn’t travel to the desert to stand in the rain. Then the wind joined the cold and rain. 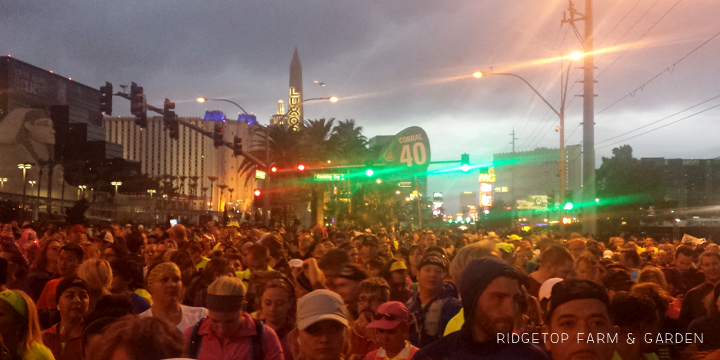 Finally, around 5:35, my corral made it to the start line. It was still cold, rainy, and windy, but at least we could finally get going. 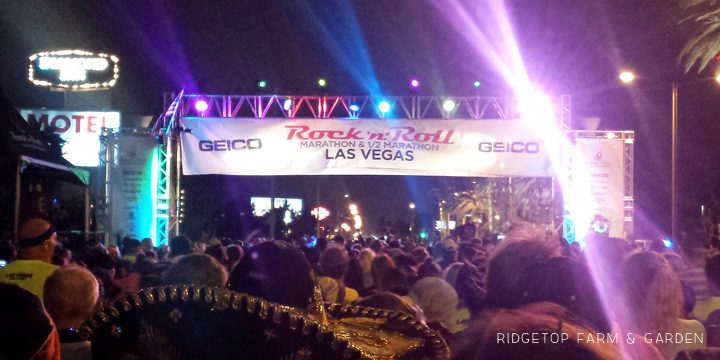 The first attraction to see was the Welcome to Las Vegas sign. It’s at the far end of the strip, so I’ve only seen it once before. Seeing the sign slightly regained my excitement.

The blustery weather stayed with us throughout this section and it seemed to take forever to make it to the main part of the strip. 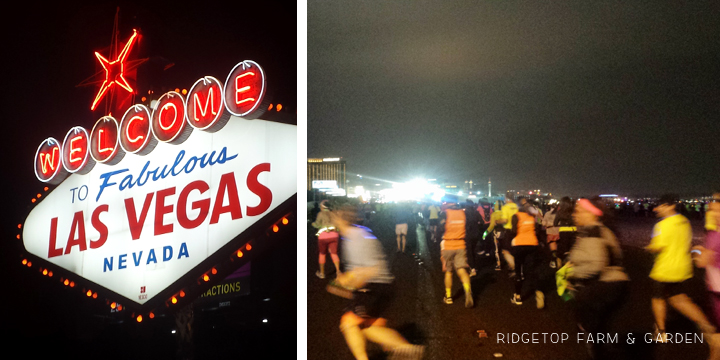 These were the good miles, from about New York, New York to the Stratosphere. The rain had stopped, although wind gusts still came and went. The scenery was fabulous. And most importantly, I felt good.

There were a number of photo ops, although none with Elvis like I was hoping. I did find a “Run now, Tequila later” guy, though.

The Eiffel Tower at Paris had gone dark due to the recent events in France.

Maybe I missed something, but I only noticed a couple stations playing music, no actual bands playing until about Mile 4 when I ran by the KISS stage. And, I’m pretty sure that it wasn’t Kissed Alive playing like what was advertised. I enjoyed whoever was playing, though, for the short time I stopped and listened. 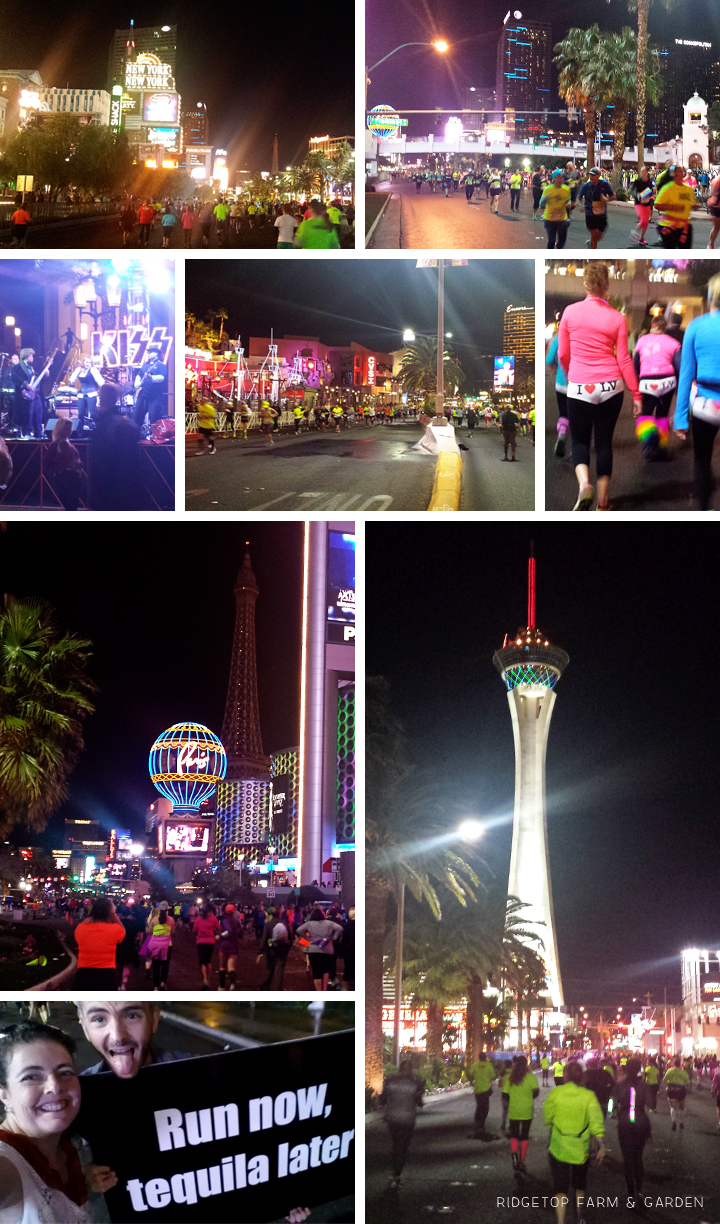 Around mile 7 my hips started bothering me, so I started walking more. I’m not sure why. I haven’t had hip pain while running in a long time. Since it was cold, maybe my body stiffened up in that hour while waiting to cross the start line. ??? Being in pain makes the moment less enjoyable, but I tried to keep positive.

After the Stratosphere, we went into an older section of Vegas. We went by many wedding chapels and the Pawn Shop from the show Pawn Stars. We went through a neighborhood and ended up on Fremont Street before making our way back to Las Vegas Blvd.

Thankfully, the rain didn’t return. However, strong wind gusts would come plowing in occasionally. I don’t know exactly how strong they were. I’ve read some reports of 25mph all the way up to 60mph. I can tell you, though, it was strong at times, making it difficult to continue running. About 30 feet in front of me a metal gate that was being used to block a road was picked up and blown across the entire road right in front of a group of runners. Thank goodness they were paying attention and dodged it.

I was happy to hear 3 or 4 bands playing throughout this section of the race. 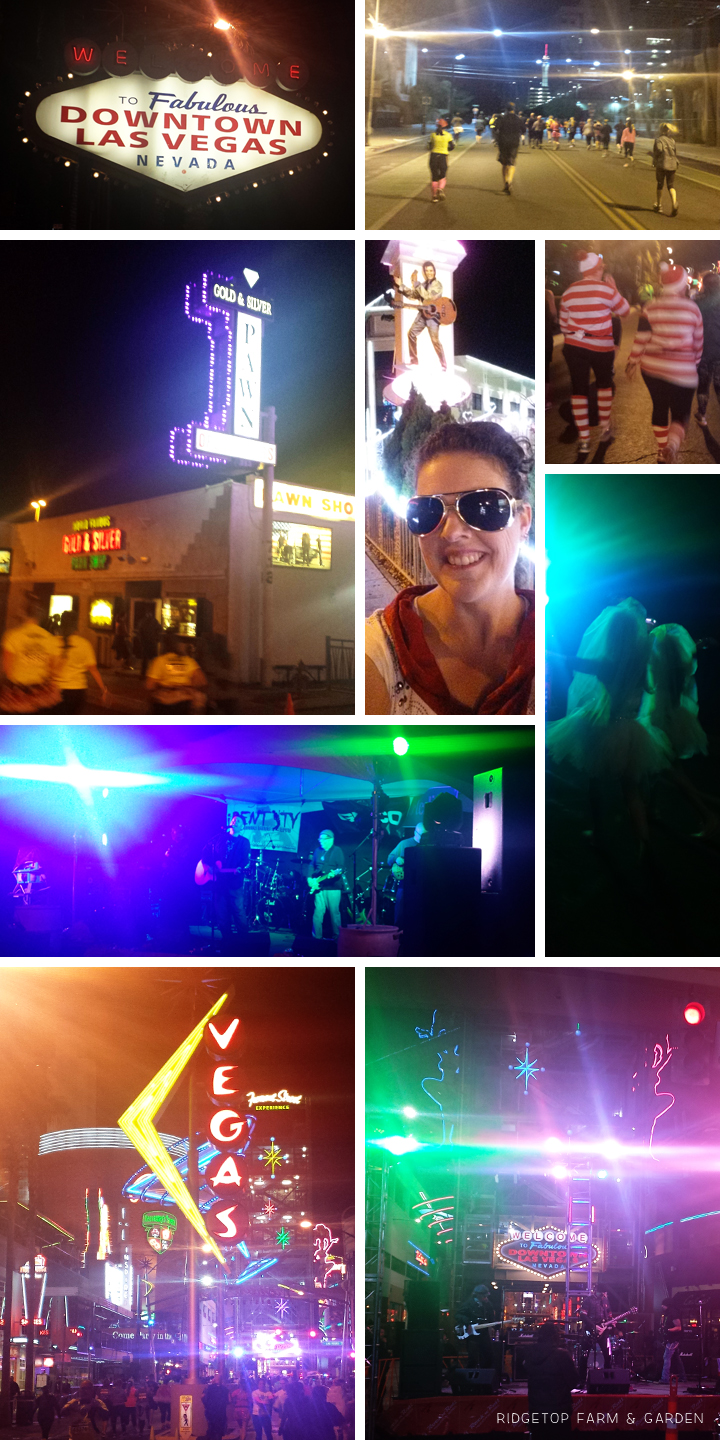 Unfortunately my phone died during this section, which means I don’t have any pictures of the finish. Boo! My hips were still bothering me, but I did pick up my pace hoping to make my phone last all the way to the end. No such luck.

I don’t remember a whole lot about this section except being thrilled once I passed the Stratosphere and the main part of the strip was getting closer.

A little more than 3 hours after crossing the start line, I crossed the finish line. Woop, woop!

The finish section was long, but I didn’t mind. It was like a built in cool down. There were lots of snacks available and a much needed heat sheet.

Remember that “Run Now, Tequila Later” sign? Well, I finished the run part. Now was time for the tequila (or two) part.

I probably didn’t express it, but it meant the world to me that my girlfriends came with me to Vegas. 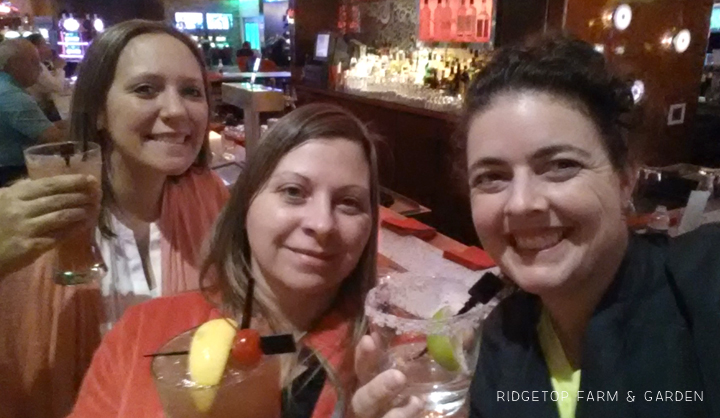 I run for bling and I absolutely love the medal! The shirt is awesome, too. 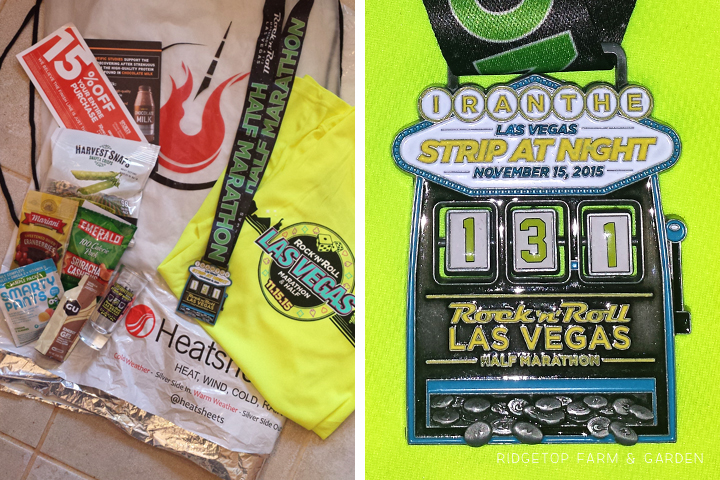 I was emailed a bunch of badges from the Rock n Roll series. I am nerdy enough that I thought they were all awesome. My favorite, though, was the one saying I finished 13.1 miles. 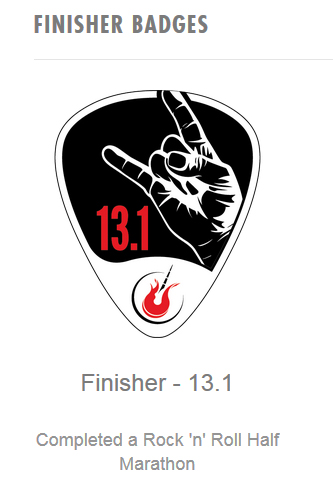 It’s interesting to me to see my heart rate throughout the course. It’s exactly as I remember it. The first half is fairly steady, then the second half clearly shows many walk breaks. 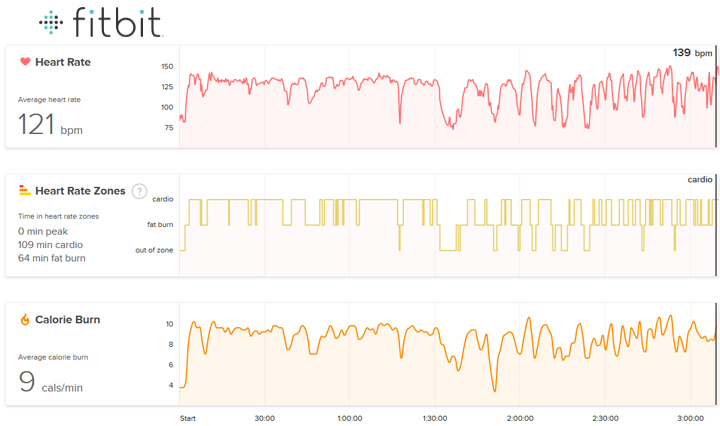 To Sum it Up

That’s not to say I didn’t enjoy the Rock n Roll event. It was a good experience and I loved running down the strip. I even enjoyed the section off the strip. By then I was hurting, but I still enjoyed the atmosphere. The lack of bands was disappointing, but maybe I went there with false expectations. I came home with aching muscles, an awesome medal and a fabulous feeling of accomplishment.

Apparently I’ve already forgotten about the less than ideal weather and achy breaky hips because once home I signed up for 3 more half’s, on top of the one I was already signed up for in January.